Russia Will Hate This: B-2 Stealth Bombers and F-35 Flew Together in Arctic 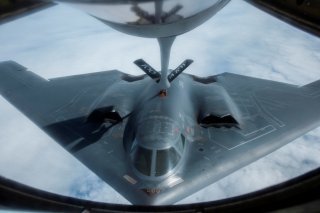 "NATO's 5th-gen(eration) capability and integration is critical for air superiority and enables precision engagement in the most highly contested environments," said Gen. Jeff Harrigian, U.S. Air Forces in Europe and Air Forces Africa commander. "Operations and engagements with our allies and partners, in the Arctic region and elsewhere, demonstrate and strengthen our shared commitment to global security and stability."

The B-2 aircraft were refueled by a KC-135 Stratotanker from the 100th Air Refueling Wing, which is stationed at RAF Milenhall, England.

Such missions represent the U.S. commitment to its allies and are meant to enhance regional security.

As UPI reported, last week's mission was one of at least five joint missions between Norwegian fighter jets and U.S. strategic bombers in the Arctic over the past seven months. In May, two Air Force B-1B Lancer bombers were escorted by British, Swedish and Norwegian fighter planes during a training exercise in the region, while in March two B-2A bombers conducted another training exercise with three Norwegian F-35s over Iceland and the North Atlantic.

Norway declared its F-35s operational at the end of last year, and currently operates 15 of the fifth generation jet fighters. It is the only operator of the aircraft that features a drag chute, which is used to slow the landing of the jet in icy conditions.

The Norwegian Air Force has been building up its fleet of F-35s, which will be used in "quick reaction alert" missions, which call for operators to stand by on a 24/7 alert and scramble – and if needed, intercept aircraft flying near Norwegian airspace. According to Defense News, once Norway has enough of the F-35 jets, pilots and maintainers it will completely phase out its F-16s.

The B-2 bomber, which first flew more than 30 years ago, was designed to penetrate dense anti-aircraft defenses and to deploy both conventional and thermonuclear weapons, including up to 80 500-pound class Global Positioning System-guided bombs, or 16 2,400-pound B83 nuclear bombs.

While having "more firepower than an aircraft carrier," The National Interest also has noted that the B-2 Spirit is quite lean on creature comforts for the crew: "Despite flying more than 40-hour missions, pilots have no bed and no refrigerator, just two seats in a small cockpit and a small area behind them about the same width as the seat."

While the United States Air Force had originally planned to purchase 132 of the B-2 stealth strategic heavy bombers, the number was cut to just 21. In 2008, a B-2 was destroyed in a crash, while its crew ejected safely. The Air Force plans to operate the other 20 B-2s until at least 2032.