Russia Won't Start a (Conventional) War in the Baltics 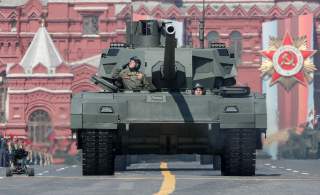 The sound of BM-21 rockets streaking across the sky. The smell of spent brass and burned powder. The rumble of BTR-82 armored personnel carriers rolling through a narrow street. Rebels sprinting from building to building through an open field of fire. These sights do not evoke a striking imagine of a modern European country, but Russian posturing in the region might lead to this.

After the collapse of the Soviet Union, international spectators believed this Eurasian military powerhouse would cease. However, the Russian Federation has returned to its old Cold War ways, increasing aggressive activities against its neighbors in an attempt to stymie North Atlantic Treaty Organization (NATO) expansion. As seen with the annexation of Crimea in 2014 or the liberation of South Ossetia and Abkhazia in the 2008 Georgian War, Russia has used its military to destabilize bordering nations.

Many leaders are worried that similar actions could be taken against the Baltic States of Estonia, Latvia, and Lithuania. Unlike Ukraine, these three countries are a part of NATO, presenting a prime target for Russian president Vladimir Putin. However, future aggression will likely come in the form of the hybrid warfare attacks as seen in Ukraine and Georgia rather than an all-out invasion like many think. As Catherine Harris and Frederick Kagan from the Institute for the Study of War have hinted at, “The Russian military is well-positioned to launch a conventional war in Ukraine and a hybrid war in the Baltic States, the opposite of what Western leaders seem to be expecting in each theater.”

Russia is simply not prepared or properly positioned to execute a well-coordinated, conventional attack on the Baltics. The amount of Russian units in close proximity to make a rapid assault is limited, and most of these formations would take significant time and resources to mobilize. It would require a large and complex movement of troops, vehicles, and equipment to successfully plan and execute such an operation. Such activity would surely catch the eye of NATO members, alerting them to a likely invasion. Instead, Russian posture is best suited for hybrid warfare against these neighboring countries.

A Glimpse of the Bear

With the Baltic States on Russia’s Western border, the Western Military District (WMD) [Западный военный округ] would be ultimately responsible for Russian military operations in that region. These districts are similar to the United States geographical combatant commands such as European Command (EUCOM) and Central Command (CENTCOM), which have separate units and command structures from multiple branches across specific regions. Russia’s WMD contains all units permanently present in the western-most part of the country while also including the enclave of Kaliningrad bordering Poland and Lithuania. Although it is comprised of naval, air, ground, cyber, electronic, and nuclear capabilities, the number of assets in the region and their locations simply do not lend themselves to making a surprise, conventional assault on the Baltics. For instance, 2017 figures show that there are twenty-two combat brigades and over 1,200 aircraft within the vicinity of the Baltics, making it a very capable force. However, these numbers do not tell the full story.

Hypothetically, if Russia were to conduct a combined-arms invasion of the Baltic States tomorrow, only a small number of forces would be properly positioned to attack. There are plenty of armored and mechanized units nearby, however, the only truly capable and quick reaction military unit available for a surprise assault would be the 76th Guards Air Assault Division (GAAD). Based in Pskov only twenty miles from the border of Estonia, they could utilize cargo aircraft (e.g. Il-76), and helicopters (e.g. Mi-8, Mi-17, and Mi-24) for airborne operations, striking the Baltics with little warning. Additionally, it is reported that the GAAD has recent combat experience in Ukraine. This is an overlooked aspect when talking about the effectiveness of armed forces. Size and equipment is not the only thing that determines a unit’s effectiveness. Recent tactical combat experience can also increase lethality, something the GAAD now excels in.

Although speed and experience is great, especially in a hypothetical Baltic campaign, these air assault units simply do not have the heavy weaponry, equipment, or logistics to maintain an offensive posture against NATO combat units. They are outfitted for quick and rapid deployments rather than sustained fighting with a superior force such as a U.S. Army Armored Brigade Combat Team. To counter this, Russia would have to mobilize their armored and mechanized forces, turning the conflict into an even bigger conventional conflict, something Putin knows would not fare well against American/NATO airpower.

Instead, a more predictable, logical, and less risky approach Russia might take would be utilizing hybrid warfare tactics like they did against Ukraine in the Crimea and the Donetsk region. By encouraging the ethnic Russian speaking populations within the three Baltic countries to side with Russia, Putin could supply these break off enclaves with weapons and equipment to sustain a secessionist insurgency, like he did during the Russian invasion of Georgia in 2008. If necessary, the GAAD could provide very small, but direct support in a feigned attempt to protect these ethnic Russians, as Russia did in the 2008 Georgian War. With their expeditionary capability to deliver rapid firepower in proximity of the Baltics, the GAAD would be perfectly positioned for this type of deployment. This form of warfighting would undermine the stability and capability of a NATO country and possibly the viability of the alliance in the long-term; precisely what Putin seeks.

So NATO is doomed in Eastern Europe? Not quite

Direct or indirect military confrontations are not the only way Russia could influence or undermine the Baltic States. Methods such as political, cyber, information, and economic warfare have all been increasingly utilized by Russia in the twenty-first century. They are the main components of hybrid warfare. Russia could easily employ them with maximum effort to degrade and/or disable the political and military capabilities of Estonia, Latvia, Lithuania—or any other neighboring country for that matter.

By launching cyber-attacks, shutting down oil pipelines, or creating at least the illusion of a contested election, Russia can impart permanent and crippling impacts in the Baltics without even firing a shot. They would not need large troop formations or armored brigades, only keyboard warriors with their fingers at the ready. It could come at any time and without warning.

The nature of these warfare methods presents their own set of problems for the West. If tanks start rolling across the border, it is an obvious attack on a NATO country, requiring Article 5 to be invoked in order to provide collective defense. However, should we view these hybrid warfare tactics the same way, especially with some in the Trump administration questioning the value of the alliance? Confusion through hybrid warfare is precisely what Putin wants to achieve. Their chances of success are higher than what most Western leaders are willing to admit.

Russia’s options are certainly plentiful and effective, however that is not to say the United States and NATO do not have ways to counter them. NATO currently has an Enhanced Forward Presence in Estonia, Latvia, Lithuania, and Poland, consisting of battle groups of roughly a battalion worth of troops and vehicles from multiple different nations. These units are the first line of defense against any Russian incursion, however, due to their small size, they are really only effective at minor deterrence. They would essentially act as a ‘holding force’ in slowing a Russian advance for no more than three days until U.S.-NATO reinforcements could arrive.

On top of these battlegroups, U.S. Marine Corps Marine Air-Ground Task Forces (MAGTF) would be the perfect unit to rapidly respond with. Although the name may be misleading, the Special Purpose Marine Air-Ground Task Force – Crisis Response – Africa (SPMAGTF-CR-AF) operates in Europe as well. It is designed as a Marine Expeditionary Unit (MEU) stationed ashore, consisting of approximately 2,200 marines utilizing dismounted infantry, armored vehicles, and aircraft. Additionally, due to recent Russian aggression, Marine Rotational Force – Europe (MRF-E) has also been stood up to be stationed in nearby Norway. These two units would be able to quickly support Baltic States in a limited, sudden conflict. With the possibility of Poland hosting “Fort Trump,” this would provide yet another element of American firepower in the region.

With forces even as small and light as these, supply is still a serious concern. To combat this, the U.S. and Norway have worked together to create the Marine Corps Prepositioning Program - Norway (MCPP-N). This program consists of six cave sites and two airfields within Norway that house equipment and supplies necessary for the two U.S. Marine Corps units. This reduces their crisis response time as equipment is readily available to deploy near the battlespace. The extended logistical support of the MCPP-N also allows these units to sustain a fight with a sizable store of supplies.

Step One to Deterring the Russian Bear: Realizing and Accepting

Even with NATO’s Enhanced Forward Presence and two rapid reaction U.S. Marine Corps units near the Baltic region, they might actually be very ineffective. If defending against a large Russian mechanized assault, their small numbers would be hopeless—unless U.S. airpower could respond rapidly enough. If attacked through dynamic unconventional hybrid warfare tactics, most are too heavily geared and trained towards a conventional battlefield to effectively counter such a situation. The SPMAGTF-CR-AF is arguably the only unit prepared for such operations. To be blunt, U.S. and NATO units in the region are poorly prepared for both possible scenarios that Russia could thrust upon the Baltics. Western military planners need to reorganize and align units in such a way that they can handle Russian hybrid warfare, while preparing for a conventional attack as a secondary measure.