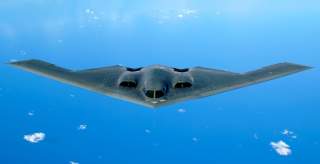 Key point: Air Force leaders have said the aircraft will likely be engineered to fly unmanned missions as well as manned missions.

When the Air Force revealed its first artist rendering of what its new Long Range Strike – Bomber looks like, former Air Force Secretary Deborah James made reference to plans to engineer a bomber able elude detection from even the best, most cutting-edge enemy air defenses.