Russian Aircraft Could be Flying High Over the Middle East 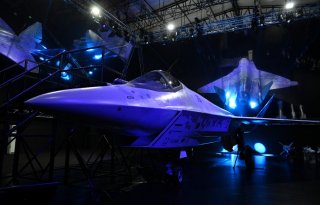 Russia will be actively looking to court international buyers, notably those in the Middle East at the Dubai Air Show 2021, which runs this week from Sunday to Thursday. Among the aircraft that will be on display is its new single-engine Checkmate light tactical fighter, a platform that has been widely touted as a more affordable option to America’s F-35 Lightning II. Currently, fourteen nations operate the Lockheed Martin F-35 Lightning II stealth fighter, and Russia clearly doesn’t want to lose its share of the combat aircraft market.

However, the Checkmate, which was unveiled last summer at the Moscow Aviation and Space Expo (MAKS), is just one of several aircraft that Sergei Chemezov, head of the state-owned technology conglomerate Rostec, said is now in great demand among nations in the Middle East.

“First of all, I want to mention the Su-57. This is the world’s sole ‘heavy’ fifth-generation fighter offered for exports,” Chemezov told TASS on Friday in a run-up to the international aviation exhibition. “It features completely different combat capabilities: stealth, a high speed, a combat payload, and maneuverability and hence the respective interest for it.”

Attendees of the Dubai Airshow will be able to view some of those combat aircraft in action, as the Russian Knights aerobatic group is now scheduled to participate in the flight program, flying Su-30 fighters.

“The aircraft of this type are an excellent example of the success of Russian products on the international market,” said Chemezov. “Incidentally, we are now testing the upgraded Su-30SM2 version.”

Russia is currently the world’s second-largest arms exporter after the United States, and a Congressional Research Service report from last month stated, “Arms sales are a central element of Russia’s foreign policy and are closely controlled by the government to advance economic and strategic objectives. Russian arms sales provide an important source of hard currency, promote Russia’s defense and political relations with other countries, and support important domestic industries.”

The trends in global arms sales remain of enduring interest to Congress, and some lawmakers have expressed concerns over the sales as it supports aggressive and malign Russian activity, fosters conflict and regional insecurity, while it also competes with U.S. arms sales.

The U.S. government has imposed sanctions against Russia’s defense industry, but it seems that has done little to curb interest in the Russian aircraft.

“Many countries have long-standing arms relationships with Russia, some dating back to the Soviet Union,” the Congressional Research Service’s report stated. “Despite its global presence, Russia exports a majority of its arms to five states (listed in alphabetical order): Algeria, China, Egypt, India, and Vietnam. India has been the largest importer of Russian arms since 2016. Russia is attempting to broaden its client base and is aggressively pursuing new markets in the Middle East, Asia, and Africa.”

The Checkmate and Su-57 have been hyped as equal to the F-35, but to date, Moscow has only produced around a dozen of the latter aircraft, while the Checkmate is still essentially in the prototype stage and won’t take its first flight until 2023 at the very earliest. Yet, it seems that Moscow wants to retain its place as an arms exporter and has done all it can to put on a good show for those potential buyers in Dubai.