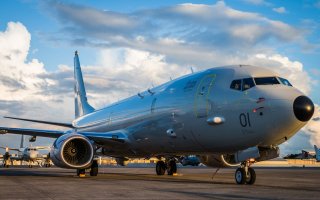 On Wednesday, the U.S. Navy reported that its maritime patrol aircraft had an “extremely close” encounter with a Russian military jet over international waters in the Mediterranean earlier in the week. According to reports, the Russian aircraft—a Sukhoi Su-35—attempted to intercept three U.S. Navy P-8A patrol planes.

“We can confirm that over the course of last weekend, three U.S. Navy P-8A aircraft experienced unprofessional intercepts by Russian aircraft,” Pentagon spokesman Capt. Mike Kafka said in a statement.

“The U.S. flight crews were flying in international airspace over the Mediterranean Sea at the time of these intercepts,” Kafka added. “We have made our concerns known to Russian officials through diplomatic channels. While no one was hurt, interactions such as these could result in miscalculations and mistakes that lead to more dangerous outcomes. The U.S. will continue to operate safely, professionally and consistent with international law in international waters and airspace. We expect Russia to do the same.”

Given the information that has come to light, the Russians may not have acted in a way that can be considered safe or professional. The Guardian reported that “A US official, speaking on the condition of anonymity, said in one of the incidents, the Russian aircraft came within several feet of one of the US navy planes.”

Russian intercepts of U.S. aircraft over the Baltic and Black Sea have been a typical occurrence since the 2014 Russian invasion of Crimea, while Moscow often categorizes the patrol flights as approaching its sovereign borders.

In 2020, in two separate incidents, Russian Air Force fighters made “unsafe and unprofessional” intercepts of P-8As over the Mediterranean Sea, USNI News reported.

However, this month’s very close encounter comes as tensions are running high given Russia’s mass buildup of forces on its border with Ukraine.

The Boeing P-8 Poseidon aircraft are designed for anti-submarine and anti-surface warfare (ASW) as well as intelligence, surveillance, and reconnaissance missions (ISR) and search and rescue missions. It is modified from the narrow-body 737-900ERX that is in service with commercial airlines around the world.

The Indian Navy has adopted the P-8I, a customized variant of the Poseidon that features a Telephonics APS-143 OceanEye aft radar and a magnetic anomaly detector. In addition to ASW and maritime reconnaissance, the P-8I can be deployed to assist during disaster relief and humanitarian missions. The P-8I was employed in the search of the missing Malaysian Airlines flight MH370 in 2014, highlighting its ability to conduct search-and-rescue operations.