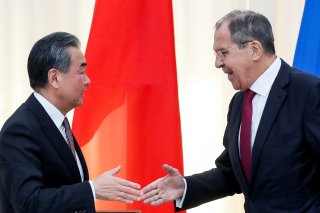 Russian and Chinese foreign ministers Sergey Lavrov and Wang Yi met in Beijing on Wednesday. The pair reaffirmed strong Sino-Russian ties even as Moscow has come under harsh criticism from the rest of the world over its invasion of Ukraine on February 24.

Lavrov’s trip to Beijing was his first visit to China since the onset of the invasion. He promised that Russia and China would grow closer together and “move toward a multipolar, just, democratic world order.” Wang concurred, claiming that the two nations’ relations had “withstood the new test of [the] evolving international landscape, remained on the right course, and shown resilient development momentum,” according to China’s foreign ministry.

“Both sides are more determined to develop bilateral relations and more confident in advancing cooperation in various fields,” Wang said.

Although Lavrov’s meeting with Wang was dedicated to discussing developments in Afghanistan, where the Taliban-led government recently closed girls’ schools hours after reopening them, the two officials also discussed events in Ukraine, according to the Chinese foreign ministry’s readout.

“We support Russia and Ukraine in overcoming the difficulties to continue with the peace talks, support the positive outcomes reached in the negotiations so far, support the de-escalation of tensions on the ground, and support the efforts made by Russia and other parties to prevent a large-scale humanitarian crisis,” Wang said during the meeting, appearing to maintain Beijing’s neutral position while praising Russia for alleged humanitarian work in eastern Ukraine.

Following Russia’s invasion of Ukraine, China sent mixed signals on its view of the conflict. Beijing officially maintained a policy of neutrality, refusing to support either Russia or Ukraine directly and rebuffing Russian requests for logistical support. Chinese diplomats at the United Nations also refused to condemn Russia for the invasion, abstaining on two UN General Assembly resolutions overwhelmingly faulting Russia for the invasion of Ukraine and demanding its withdrawal from the country.

At the same time, however, Chinese media outlets have largely embraced the Russian narrative of the invasion, arguing that Russia acted in self-defense to ensure the demilitarization and neutrality of Ukraine after NATO’s eastward expansion. The Chinese government declined to participate in international sanctions against Russia, and Chinese businesses have continued to do business there, including with Russia’s arms industry. The White House has publicly warned Beijing that it would face consequences if it helped the Russian government evade international sanctions, although it is unclear what those consequences might be.

Sino-Russian ties have grown increasingly close over the past decade as both nations’ relationships with the United States have soured. During the 2022 Winter Olympics in Beijing, Russian president Vladimir Putin visited China during the 2022 Winter Olympics and met with Chinese president Xi Jinping. The two leaders released a joint statement insisting that the “friendship between the two states has no limits.”