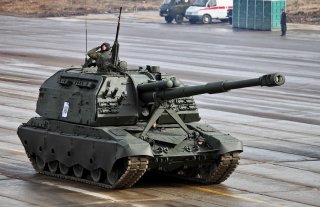 This is the upgraded version of the 2S19, which was designed in the late Soviet era and first entered service in 1989 as a successor to the 2S3 “Akatsyia.” The vehicle comprises a turret mounted on a tracked armored 6x6 chassis, which is based on a T-80 main battle tank (MBT) hull, yet it is powered by a T-72 MBT diesel engine. Road speed is sixty km/h with a range of five hundred km.

The improved version is reported to be equipped with a new automatic fire control system, which can greatly increase the rate of fire. It also utilizes electronic maps that can significantly speed up terrain orientation in difficult geographical conditions and allow for faster and more efficient firing missions.

It is armed with a 152mm/L47 howitzer, which is similar in design to the gun employed on the 2A65 Msta-B towed howitzer. It is fitted with a semi-automatic loader and fume extractor. The gun can apparently be loaded at any angle, while its maximum rate of fire is seven to eight rounds per minute. The Msta-S is compatible with all standard 152mm projectiles used by the D-20 towed gun-howitzer as well as 2S3 Akatsiya self-propelled howitzer. It can fire a wide range of munitions, including standard and rocket-assisted HE-FRAG projectiles, cluster projectiles with anti-tank submunitions, jammer carrying projectiles. It is capable of firing Krasnopol precision-guided munitions. A total of fifty rounds are carried inside the Msta-S.

The elevation of the gun is from plus 68 degrees to minus 3 degrees with a 360-degree traverse. The 2S19M2 “Msta-S” has a reported range of up to 80 kilometers (50 miles). This artillery system also has a brief reaction time, while it can stop and fire its first round within one to two minutes from traveling.

Secondary armament consists of a remotely controlled 12.7 mm machine gun mounted on top of the roof, which can be controlled by the vehicle’s commander. Additionally, three smoke grenade dischargers are mounted on each side of the turret.

The crew is protected against small arms fire and artillery shell splinters from welded steel armor on the hull and turret. The vehicle is also fitted with NBC protection and automatic fire suppression systems.

“In creating the 2S19M2 ‘Msta-S’ weapon, the rate of its aimed fire was improved to 10 rounds per minute, its aiming accuracy was increased and the artillery burst mode was introduced to strike a target with five shots at a time and exit the position,” Uraltransmash CEO Dmitry Semizorov said in a statement to TASS, adding, “Also, the crew habitability conditions were improved.”