Is the Russian Avangard Hypersonic ICBM a Serious Threat? 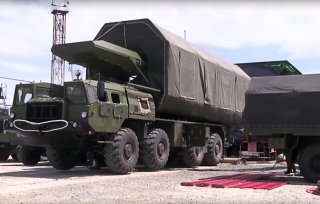 Exactly how serious a threat Russia's Avangard hypersonic intercontinental ballistic missile (ICBM) is to the United States isn't entirely clear. The ICBM is reported to have both hypersonic speed and an ability to fly a “maneuvering” flight path through the atmosphere. Such a combination would make it considerably difficult to counter.

It can reportedly cruise at twenty-seven times the speed of sound and its ability to maneuver could make it almost impossible to correctly predict its trajectory, which provides the ICBM with the ability to protect itself from air and ballistic missile defenses that try to impede its path.

“The United States has practically no chances to resist the Avangard, since, in the event of large-scale hostilities, Russia will attack a potential enemy with all available weapons,” Maj. Gen. Vladimir Popov, honored military pilot of the Russian Federation and candidate of technical sciences, was quoted by the Eurasian Times earlier this month.

“In this case, the defensive complexes will not be able to identify all targets,” Popov added. “Among the attackers, there will be false missiles without charges as well as electronic interference due to electronic warfare. Among the many attacking missiles, some will still reach their destination.”

The news outlet, which suggested that Beijing has praised the fact that Russia’s nuclear-tipped hypersonic ICBMs, could “devastate” U.S. defenses, also noted that the United States and Russian Federation remain very much in parity, while other nations cannot yet catch up.

The Avangard is still just one component of Russia’s large arsenal of such weapons, which include 528 land- and submarine-based ICBMs, plus nuclear weapons on bombers. America’s missile defenses have only focused on intercepting a handful of ICBMs launched by a small power like North Korea.

“The air and missile defense system of the United States is very strong,” Popov added. “It cannot be written off and underestimated; we are talking about a deeply echeloned engineering network. It is thought out and protects the most important regions of the country.”

The development of such weapons may not give America's adversaries a significant advantage, however. Should U.S. nuclear launchers, ICBMs or even land-launched, nuclear-armed strategic bombers be rendered ineffective or destroyed, the United States still has available options with which to retaliate; including measures via the U.S. Navy’s nuclear-armed ballistic missile submarines.

In addition, the United States is continuing to develop weapons that could be seen as a deterrent against the use of the Avangard and other ICBMs. Earlier this month, the U.S. Air Force announced that it had awarded Northrup Grumman a $13.3 billion Engineering and Manufacturing Development contract for the Ground-Based Strategic Deterrent (GBSD) intercontinental ballistic missile program.

Moreover, in June, President Donald Trump addressed the fact that the United States military has its own hypersonic missile.

“We are building new ships, bombers, jet fighters, and helicopters by the hundreds; new tanks, military satellites, rockets, and missiles; even a hypersonic missile that goes seventeen times faster than the fastest missile currently available in the world and can hit a target one thousand miles away within fourteen inches from center point,” the president said during his address at the 2020 United States Military Academy at West Point Graduation Ceremony.

While the president’s description of the accuracy of the United States’ hypersonic missiles has been called into question, it remains very much true that the U.S. military won’t allow any nation to gain such an upper hand when it comes to ICBMs.