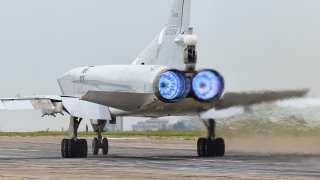 Russian and Belarusian warplanes conducted a new round of joint air patrols amid simmering military tensions in Eastern Europe.

“The flight was conducted at an altitude of about 8,000 meters and at a speed of around 750 km/h in combat formations at minimum intervals and distances,” the statement said, according to Russian state-backed news outlet TASS.

The statement also said that the drills are part of an ongoing inspection of the “Union State’s” response force. The Union State is a reference to a 1999 economic, political, and military integration framework adopted by Russia and Belarus.

Those drills were followed by an air patrol of two Tupolev Tu-22M3 bombers in Belarusian airspace.

“As part of an inspection of the Union State’s Response Force, two Tu-22M3 long-range bombers of Russia’s Aerospace Force performed their second patrol in the airspace of the Republic of Belarus this month The flight lasted about four hours," the Russian defense ministry said in a statement issued through TASS

The Tu-22M3 bombers were partly escorted by Russian Su-35 and Belarusian Su-30SM fighters. That flight was preceded by an earlier Tu-22M3 patrol on February 5, according to Russia’s defense ministry.

The recent round of Russian-Belarusian aerial activity comes amid what Minsk and Moscow describe as an uptick in “threatening” NATO drills and patrols near Union State borders. Alexander Volfovich, secretary of the Belarusian State Security Council, warned in late January that NATO forces stepped up the frequency of bomber sorties along Union State territory, characterizing the alleged activities as a “breach of international norms and elementary rules of good neighborly relations by neighboring countries.”

Belarus claimed in November 2021 that NATO has doubled its reconnaissance and combat patrol flights near Belarusian borders.

NATO Secretary-General Jens Stoltenberg announced last week that 30,000 Russian troops have poured into Belarus for the joint “Union Resolve 2022” exercises between Russia and Belarus. The drills, which are projected to run from February 10-20, will reportedly include measures aimed at “suppressing and repelling external aggression, as well as countering terrorism and protecting the interests of the Union State.”

The Kremlin has not confirmed the number of Russian troops participating in the exercises, but said on Tuesday that the Russian forces currently in Belarus will not permanently remain there. “No one ever said that Russian troops would remain on the territory of Belarus, there was no talk of this,” Kremlin spokesman Dmitry Peskov said. “We are talking about allied exercises, and it is understood that after these exercises are completed, the troops will return to their permanent locations.”