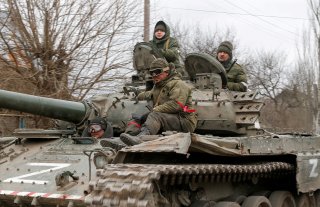 The Russian economy saw sharp contractions on Monday after the United States, the European Union, and other Western nations and international organizations imposed a raft of sanctions against Moscow for its invasion of Ukraine last week.

The U.S. Treasury Department, which initiated the sanctions, initially argued that they would both deprive the Kremlin of funds and punish Russian leaders, including president Vladimir Putin and his inner circle, for their role in initiating the conflict.

“The unprecedented action we are taking today will significantly limit Russia’s ability to use assets to finance its destabilizing activities, and target the funds Putin and his inner circle depend on to enable his invasion of Ukraine,” Treasury Secretary Janet Yellen claimed in a statement.

In addition to other sanctions, the United States ordered a number of major Russian banks, including the country’s central bank, to suspend transactions in U.S. dollars. SWIFT, an international organization that authenticates bank transfers, also blocked the banks from accessing its network, effectively suspending their ability to engage in transactions with the rest of the world.

After the sanctions were announced, the Russian ruble collapsed in value, appreciating 30 percent against the U.S. dollar. A number of Western companies also indicated that they would withdraw from Russia to avoid violating sanctions rules.

While Putin and his allies had reportedly stockpiled a $630 billion “war chest” of foreign currency for use in such an emergency – to be exchanged for rubles within Russia in order to keep the exchange rate from collapsing – the suspension of international transactions appears to have pre-empted this strategy. Media reports also indicated that some of the Russian government’s foreign currency had been stored in Western countries and promptly frozen at the outset of the conflict, preventing the Kremlin from accessing it.

To stem the tide of losses, the Russian stock market suspended its exchanges until March 5, theoretically giving Moscow time to prepare a recovery strategy.

Russia invaded Ukraine on February 24 after months of building up troops on Ukraine’s borders. However, the invasion has bogged down in the wake of fierce Ukrainian resistance, and severe deficiencies have been revealed in the Russian army, including low morale and the extensive use of untrained conscripts. An estimated 4,500 Russian troops have lost their lives in the first week of the conflict, a larger number than the United States has lost during its nineteen-year military presence in Iraq.

Diplomatic efforts to end the war and withdraw Russian troops remain ongoing, although negotiators have reported remained at an impasse. Russian troops have continued their offensives on major Ukrainian cities including Kyiv and Kharkiv, leading hundreds of thousands of Ukrainians to flee to the country’s west and to neighboring countries.