Russian Forces Prepare for an All-Out Assault on Kiev 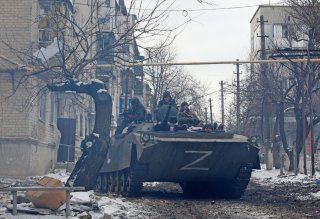 Russian Defense Ministry spokesman Igor Konashenkov said on Sunday that the Russian military has destroyed just under 4,000 Ukrainian “military infrastructure” targets since the start of hostilities on February 24.

"Overall, 3,736 facilities of Ukrainian military infrastructure have been disabled during the operation," he said, according to Russian state news outlet TASS. Konashenkov claimed that 1,234 tanks and other armored vehicles, 122 multiple-launch rocket systems, 139 unmanned aerial vehicles, 452 weapons of field artillery and mortars, and “1,013 units of special military hardware” were destroyed. He added that one Ukrainian Su-24 fighter jet and eleven drones, including two Turkish TB2 Bayraktars, were downed by Russian aircraft and air defenses over the weekend.

Despite these reported battlefield victories, the Russian ground advance in Ukraine has been slower than expected. "I would like to say that yes, not everything is going as fast as we would like," said Viktor Zolotov, chief of Russia's national guard and a member of Putin's security council. "But we are going towards our goal step by step and victory will be for us." Zolotov attributed Russia’s partially stalled progress to what he claimed were Ukrainian ultranationalist fighters hiding behind civilian populations.

The Russian invasion was executed along three axes: from the north through Belarus, from the south through Crimea, and from the east through the Russian-Ukrainian border and separatist-held territories in Donbass. Russia’s northern forces quickly captured the Chernobyl power plant and made their way down to the strategic Gostomel Airport, but they have since been bogged down in the outskirts of Kiev. Ukraine’s capital city has defied widespread western predictions that it would fall within two to three days of a Russian invasion. However, according to the latest reports from the ground, local Russian forces are now regrouping for a renewed all-out assault on the city. The Russian military largely confined its airstrikes and shelling to Ukrainian military assets and facilities in the campaign’s opening days, but it has since shifted to more indiscriminate forms of bombing against major population centers.

Russian and Russian-backed separatist forces are seeing slow but steady progress in eastern Ukraine, where the eventual goal is to cut the Ukrainian military off from everything east of the Dnieper River. Kharkiv, Ukraine’s second-largest city, remains under constant shelling, with more than 600 buildings destroyed since the start of the invasion.

Russian troops have made sweeping gains in the south, capturing the Black Sea port city of Kherson. State media reported on Tuesday that the invading forces are on the verge of entering the coastal hub of Mariupol, one of the last major vectors of Ukrainian resistance in the southeast. Russian forces are now besieging the southern city of Mykolaiv, a major milestone on their projected path to the strategically vital southwestern port city of Odessa.