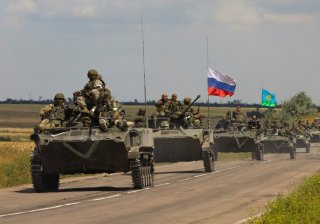 The Russian military has confirmed its retreat from the strategic city of Lyman just a day after Moscow moved to annex parts of eastern and southern Ukraine.

“Massed strikes on the positions of the 66th and 93rd Mechanized Brigades of the Armed Forces of Ukraine in the Krasny Lyman direction killed over 200 Ukrainian servicemen, five tanks and nine infantry fighting vehicles (IFV’s) over the past day,” Russian defense ministry Spokesman Igor Konashenkov said Saturday. “Despite their losses, considering their significant advantage in troops and resources, the enemy brought in reserves and continued their advance in this direction. In connection with the creation of a threat of encirclement, the allied troops were withdrawn” from Lyman “to more advantageous lines.”

Russian and Russian-aligned separatist troops captured Lyman, located in the Donetsk region to the northeast of the Ukrainian stronghold of Sloviansk, in May. The city was used as a logistics hub by Russian forces in their campaign to consolidate control over the Donbass area in eastern Ukraine.

The Russian retreat from Lyman creates a window of opportunity for Ukrainian forces to push deeper into Russian-held territory in the neighboring Luhansk region, said Ukrainian military spokesman Serhii Cherevatyi. “[The liberation] of Lyman is important, because it is another step towards the liberation of the Ukrainian Donbas. This is an opportunity to go further to Kreminna and Severodonetsk. Therefore, in turn, it is psychologically very important,” Cherevatyi told Ukrainian media, according to Reuters.

The fresh setback for Russia’s military comes on the heels of a Friday speech by Russian president Vladimir Putin greenlighting the annexation of four regions— Luhansk, Donetsk, Zaporizhzhia, and Kherson— in eastern-southeastern Ukraine. The Lyman retreat sparked outrage among some hawkish Russian commentators and politicians who have previously expressed dissatisfaction with senior officials’ handling of the Russian war effort. “The defense of this sector was entrusted to the commander of the Central Military District, Colonel-General Alexander Lapin. The same Lapin who received the Hero of Russia medal for the capture of Lysychansk, although he was de-facto nowhere to be seen [in Lysychansk],” wrote Chechen leader Ramzan Kadyrov on Telegram. Kadyrov accused Lapin of failing to provide local Russian-aligned Luhansk People’s Republic (LPR) troops with the necessary support in logistics and materiel. “If I had my way, I would demote Lapin to a private, deprive him of his awards and send him to the front lines with a machine gun in hand to wash away his shame with blood,” he added.

Kadyrov endorsed the idea, supported by an increasingly vocal subset of Russian nationalists, that the Russian military should employ low-yield nuclear weapons in Ukraine. Deputy Chairman of the Security Council and former Russian president Dmitry Medvedev said earlier this month that Russia can use all measures at its disposal, including possible nuclear strikes, to defend its newly-annexed territories.