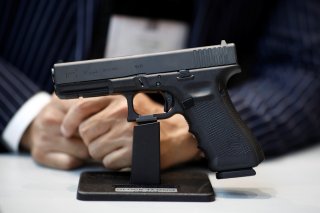 Russia has had a unique relationship with the West throughout its history. During the reign of Peter the Great at the turn of the eighteenth century, Russia adopted western fashion while the Russian Army was reorganized along the modern lines of the western powers. Russia's efforts towards westernization continued through the Russian Revolution in 1917. While such efforts to westernize were held back during the Soviet era, after the collapse of the Soviet Union, there was a renewed concept of westernization again.

Yet Russia still maintains a distinct identity today. Its military has rarely relied on foreign equipment or small arms. As the second-largest global exporter of military hardware after the United States, Russia continues to develop its own unique rifles, machine guns, and handguns.

Some westernization has continued, though. Even the infamous Federal Security Service of the Russian Federation (FSB) – the principal security agency of Russia and the main successor agency to the Soviet Union's KGB – is not immune.

The Austrian-produced Glock 17 is a favorite of the FSB. The handgun took the world by storm after it was released in the early 1980s, going on to serve with military, paramilitary, and police forces around the globe. The Glock 17 is more expensive than Russian-produced alternatives, but remains popular.

As Russia Beyond reported, a standard Makarov or Yarygin pistol may only cost around $300. But a Glock 17 will set back an FSB agent some $2,000 due to rates and taxes gun owners must pay to purchase the weapon. The added cost is worth the difference as the domestic handguns may be good for 4,500 "guaranteed rounds," while the Glock can fire upwards of 300,000 guaranteed rounds.

The Glock’s use in the FSB even led Kalashnikov Concern to develop the MPL and MPL1 pistols as a way to show that Russia's small arms industry can develop and produce a quality service handgun.

Despite being the nation that developed the first successful assault rifle with the AK-47, some Russian units prefer the German-produced MR308. That isn't entirely surprising, as the AK was heavily influenced (at the very least) by the German StG44, which was a far more refined weapon.

The MR308 has found favor with FSB marksmen even as the latest generation of AK-based rifles is still in the hands of the average Russian military ground pounder. Like its predecessors, the current generation of AKs is unbreakable, requires minimal maintenance and can send a lot of rounds down range.

Finally, even as Russia has continued to produce some notable marksman and sniper rifles, it seems that some Russian FSB operators remain loyal to Steyr Mannlicher SSG (Scharfschützengewehr) series of bolt action rifles. Russia's FSB may be loyal to the motherland, but it will defend the country with whatever weapon is proven to work best.