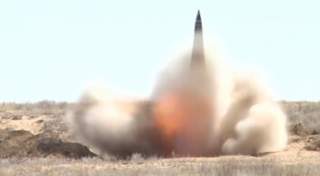 Defending against Russia would require massive missile defenses including space-based sensors and interceptors. Even with the revised Trump administration programs, the U.S. currently plans only 64 interceptor missiles for strategic missile defense. While the SM-3 Block 2A naval missile defense interceptor, according to the 2019 Missile Defense Review, has the potential to intercept ICBMs, the capability of the system is apparently limited to rogue state threats. In light of the shortage of U.S. warships, it is unlikely that many Aegis destroyers would be devoted to homeland defense and the system itself is unlikely to have good capabilities against sophisticated Russian strategic ballistic missiles with advanced countermeasures. The upgrades to the DG-51 Flight 3 will be very useful for missile defense but to deal with a major attack by Russian strategic ballistic missiles, the interceptor missiles will have to be upgraded with multiple kill vehicles.

Hypersonic missiles are dramatically more important in the theater attack role against heavily defended theater targets and Aegis cruisers and destroyers (which have advanced air defenses and some missile defense capability) protecting carrier strike groups. In an anti-ship role, Russian hypersonic missiles will have a large advantage over U.S. subsonic cruise missiles. This is important because Russia has advanced land-based and naval air defenses. The advantage posed by hypersonic missiles will be particularly important regarding the defeat of terminal ship defenses.

Russia claims that its new and soon to be operational S-500 missile/air defense system is capable of intercepting hypersonic missiles. Russia has said the same for its now widely deployed S-400 system. These claims could very well be true, particularly for the S-500. However, the capability is likely limited to the nuclear-armed missiles. There is no indication in open sources that the Russians have tested hit-to-kill versions of their new high capability SAM systems against either very high speed ballistic or hypersonic weapons.

The S-400 and S-500 systems are reportedly nuclear-capable and these systems were designed to fight against the U.S. The S-500 would certainly have a greater capability against hypersonic missiles than the S-400 because the S-500 is designed to intercept ICBMs. The Russians are planning to deploy these systems in large numbers. Early reports indicated an intent to deploy ten battalions of S-500, and recent reports speak about deploying regiments, which is about the same number. TASS has stated that the S-500 will replace the S-400 in the 56 battalions which will be deployed.

Ironically, the capability of hypersonic missiles to penetrate advanced air defenses (which Russia and China have) is potentially much more important to the U.S., but we don't have them while the Russians do. The S-400 is being sold to China. The Chinese may very well upgrade it and turn it into their major missile defense asset.

Protecting the U.S. national command authority and key strategic missile and bomber bases against Russian ballistic and hypersonic missile attack is critical. Ideally, this should be combined with the construction of deep and hardened underground facilities to protect our nuclear command and control, but this is unlikely because of the cost. At a minimum, resumption of nuclear command and control flights commanded by a general officer should be undertaken.