Russian Mercenaries are Officially in Mali—and the West is Furious 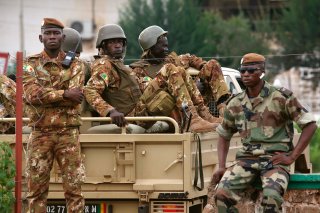 The “Wagner Group,” a Russian mercenary firm, has been deployed to Mali to help the country’s army contain a growing Islamist insurgency in its northern region.

The move has drawn harsh reactions from the United States and Western Europe, which have already deployed troops in Mali to help contain the Islamist rebels and strongly oppose the presence of the Wagner Group, which they have tied to human-rights abuses in the developing world.

France, which has begun to wind down its military mission in the country, condemned the Malian government’s decision, noting that the money used for Wagner Group mercenaries could have been put towards developing and professionalizing the Malian military.

“We deeply regret the choice of the Malian transitional authorities to use already scarce public funds to pay foreign mercenaries instead of supporting the Malian Armed Forces,” a statement released by the French Foreign Ministry said. It also requested that Russia, which is widely suspected of funding the mercenary unit, “revert to a responsible and constructive behavior” within Mali.

Mali’s Islamist insurgency has continued since 2012 when Islamists allied with secessionist Tuareg rebels drove the Malian armed forces out of the country’s sparsely populated north and established a proto-state called Azawad, aided in part by weapons stolen from Libyan armories in the chaos following that country’s 2011 uprising.

The French military intervention, which began in 2013, drove the Islamists from northern cities, but they regrouped in the desert and continued to wage a low-level insurgency. The Islamist threat spread to other countries, too, leading to a region-wide counterinsurgency effort led by France and the United States.

The Malian government is currently led by Col. Assimi Goita, who seized control of the country in a coup in May. Relations between Mali and France sharply declined in the aftermath of the coup, which was condemned by most of the Western world. Goita has indicated plans to hold elections in February 2022, although he has suggested that they might be delayed if the country’s security situation deteriorates.

The United States also condemned the deployment of the Wagner Group. “We are alarmed by a potential deployment of Russia-backed Wagner Group forces in Mali,” read a statement issued by State Department spokesman Ned Price.

“We understand that the reported deal—costing $10 million per month—diverts money that could be used to support the Malian Armed Forces and public services to pay for the deployment of Yevgeniy Prigozhin’s Wagner Group forces to Mali.  Wagner forces—which are known for their destabilizing activities and human rights abuses—will not bring peace to Mali, but rather will destabilize the country further,” the statement continued.

“We urge the transitional government in Mali not to divert scarce budgetary resources away from the Malian Armed Forces’ fight against terrorism,” according to the statement.