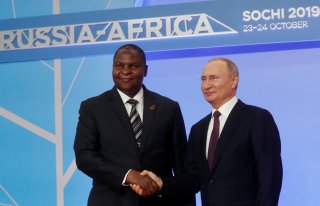 A few days ago, Russian mercenaries affiliated with the Wagner Group indiscriminately opened fire on a village in the Central African Republic (CAR), killing seventeen people. How has the international community responded to such incidents? Some multilateral groups, like the United Nations Working Group on the Use of Mercenaries, have focused on the specific dangers of Russian security contractors. But while it is important to criticize the egregious human rights abuses attributed to the Wagner Group in the CAR, better analysis would characterize its footprint in the CAR as a maintenance and exacerbation of the status quo in a conflict defined by profit motives and zero-sum political competition.

Back in February 2019, CAR leadership and armed groups signed the Khartoum Accord, a peace agreement that the United Nations said came at a “critical stage.” Instead of achieving peace, the agreement created competition between the armed groups for government positions, through which they could access state resources and funding from the government. The Wagner Group was instrumental in pushing this peace agreement to protect its nascent mining investments. By working with the Wagner Group, the CAR government has upheld and exacerbated the status quo.

Because it views Russian involvement as a quick fix to the conflict, the CAR government has failed to upend its country’s conflict. Relying on Russian mercenaries to simply eliminate rebels by force forgoes an opportunity to undermine and address the profit motives of the violence. At the same time, the mercenaries’ abuse of the civilian population delegitimizes any interest that these citizens have in participating in peaceful political processes, buttressing the reality of zero-sum political competition. In short, by contracting Russian mercenaries, the CAR government has upheld the profit motives and zero-sum political competition driving the conflict.

President Faustin-Archange Touadéra has made the situation even worse. By promising that businessmen connected to the Wagner Group will reap the rewards of controlling mining sites, Touadéra compounded the profit motives of the conflict by manufacturing a narrow incentive for specific territorial control at all costs. In contrast, if the CAR government was at all interested in ending the conflict, it would focus on extending state capacity across the entire country and upholding human security.

Despite these dynamics, the international community’s response has been to ignore the financial motives and continue to support sham peace deals. The 2021 renewal of the United Nations Multidimensional Integrated Stabilization Mission in the Central African Republic—a peacekeeping mission—was meant to be a response to the peace deal, yet it focused on human rights and even gender parity. It is true that the United Nations has discussed mineral trafficking and international fines, but it only sees profit as a proximate driver of arms acquisition rather than the ultimate cause of the conflict. A report from the United Nations Panel of Experts on the Central African Republic, for instance, addresses everything from natural resources to factionalization without any mention of profit.

The international community is quick to accept peace deals as legitimate frameworks because they seem to show progress is being made. It should instead view these deals as mechanisms through which governments can keep up appearances, pocket donor money, and partner with rebel groups.

Some argue that Russia has tied the hands of CAR leadership. Wagner has become so entrenched in the country that the government would risk biting the hand that feeds it if it demanded change. But even with all the violence, the public still leans towards supporting the Russian presence. “Most [Central Africans],” one journalist told Foreign Policy, “are fed up with negotiating and have lost faith in the peace process.” All of the peace agreements preceding Russian involvement have failed to curb the violence, so it is no wonder Central Africans want more forceful outside help.

Unfortunately, it is unlikely that the CAR government will be motivated to put human security over self-interested profiteering anytime soon. In the Central African Republic, the conflict-conducive status quo means business for the government, but violence for its people.

Sam Abodo is a former intern at The National Interest and a junior at Carnegie Mellon University. This article was written January 8th, 2022, in his personal capacity.

Mike Brodo is a senior in the African Studies Program at Georgetown University’s School of Foreign Service. Follow him on Twitter @MikeBrodo.