The Russian Military is Facing a Looming Demography Crisis 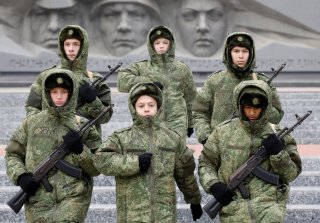 Peter Suciu has written previously in National Interest about the Russian Finance Ministry’s proposed ten percent reduction in military personnel as a cost-cutting measure and about the pushback the proposal has received from the Russian Ministry of Defense (MoD). Budgetary pressure associated with the Covid-19 pandemic makes the need for cutbacks like this understandable, but it is not the only challenge that threatens the size of Russia’s armed forces; the other is demographic, and it has been a long time coming.

When the Soviet Union collapsed in 1991, the newly formed Russian Federation’s demography essentially walked off a cliff. Fertility rates fell far below the replacement rate of 2.1 births per woman—reaching an anemic 1.2 from 1997 to 2001—and death rates skyrocketed. Unsurprisingly, one generation after this demographic disaster, the Russian military is facing difficulties maintaining a military with roughly 900,000 personnel. However, whatever challenges the Russian military has faced thus far pale in comparison with demographic constraints it will face in the next decade.

According to the UN’s World Population Prospects report from 2019, there were a projected 14.25 million men aged 20-34 in Russia in 2020. By 2050, the median estimate predicts there will be only 12.91 million. A nine percent decrease in the recruiting pool will obviously complicate the military’s recruitment efforts. However, the true disaster is far closer than mid-century; in 2025, there will be only 11.55 million and in 2030, 11.23 million. This means there will be a roughly 20 percent decrease in the number of eligible male recruits during the 2020s. This problem predated the coronavirus and the associated budgetary constraints.

How specifically will this 20 percent decrease in eligible male recruits impact the military’s strength? A crude metric, the “militarization rate”—a ratio comparing the number of men aged 20-34 with the size of the military—allows Russia’s demographic challenges to be put into context. In 2020, Russia’s militarization rate was 6.31 percent, based on 14.25 million men aged 20-34 in the country and a standing military of 900,000 (as estimated by the Institute of International and Strategic Studies). Before we compare this to other countries, the limits of this metric should be addressed; first, approximately five percent of Russia’s armed forces (45,000 people) are female, and thus are not accounted for by this metric, and second, men aged 18 and 19 are eligible to serve and thus are also not accounted for. Nonetheless, this admittedly crude metric provides a method of comparing Russia’s level of recruitment with other nations in order to place Russia’s demographic challenges into context.

If there is such a thing as a hypothetical “maximum militarization rate” that a society can bear, Russia is by far the closest major power to reaching it, meaning its capacity to increase recruitment over the medium-term is severely limited when compared to its peers. This does not mean that the situation is hopeless, although it may be more complicated after the coronavirus pandemic. Some options, like salary increases to make military careers more attractive, are already a nonstarter, since as Peter Suciu writes, the Finance Ministry is already moving in the opposite direction.

Another solution could be to extend the term of conscription to two years instead of one. Due to the highly technological nature of modern warfare, conscripts spend a significant portion of their service in training and are thus only combat-ready for the last few months of their term. If the draft was extended, conscripts would be combat-ready for longer and the MoD would not lose the human capital it spent time and money developing after only a few months. There are tradeoffs to this approach; keeping young men in the military longer would mean keeping them out of the labor force for an additional year and could negatively impact growth. Additionally, conscription is already politically unpopular and any moves to extend it would almost certainly be met with resistance, something of which the approval-rating-obsessed Putin regime may be wary.

Altering the MoD’s approach to the role of women in the armed forces could also address the problem, at least in part. As mentioned earlier, there are currently about 45,000 women serving in the Russian armed forces, but they face different physical requirements and are not eligible for combat roles. The MoD could amend its policy in three ways: allow women to volunteer for combat roles, extend the draft to women but not for combat roles (thus freeing up men to serve in combat roles), or fully extend the draft to women for all roles. All three of these possibilities are unlikely to materialize, but the MoD has indicated its willingness to evolve on this issue by its decision to allow women to serve as pilots. To be clear, Russia does not need to implement Israeli-style conscription of women to address this problem; female recruitment is low even compared to the United States, where in 2019 women constituted 20 percent of the Air Force, 19 percent of the Navy, 15 percent of the Army, and 9 percent of the Marine Corps. Increasing the female component of the Russian armed forces from just five percent to even ten percent could significantly address Russia’s declining male recruitment pool over the next decade, even if they only serve in support roles.

It is important to note all of these challenges exist so long as the MoD seeks to maintain its current size. As demonstrated by its resistance to the Finance Ministry’s recently proposed ten percent cuts, the desire to maintain the current size of Russia’s armed forces remains strong. However, the financial burden that such a policy would entail—made worse by Covid-19—is only part of the story. In five, ten, and even thirty years, Russia will have fewer young men than it has right now. If maintaining a 900,000-man standing military is already challenging, how will such a target be attainable in the decades to come? The solutions proposed here, such as increased salaries, extending the draft, or increasing female recruitment are all ways to address the problem to varying extents, but they do not change the fundamental problem of Russia’s demographic structure and the challenges it poses to the Russian Armed Forces. If in the coming decade we see the Russian Federation draw down the size of its military, such measures may be blamed on coronavirus-related cutbacks. While this explanation may not necessarily be untrue, a decrease in the size of the armed forces was already baked into Russia’s demographic profile; the Covid-19 pandemic may end up being a convenient scapegoat.

Ethan Woolley is a student at the European University at St. Petersburg, where he is pursuing an MA in Energy Politics in Eurasia. He graduated from the University of Pennsylvania with a BA in International Relations and Russian and East European Studies.