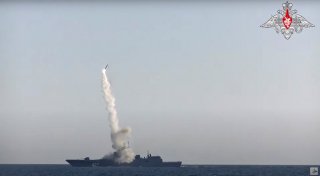 President of the Russian Federation Vladimir Putin has repeatedly said that his nation’s hypersonic weapons are unequaled in the world, and previously proclaimed that the missiles would “without doubt in the long term boost the defense capabilities of our state." It now appears that Russia will begin to receive deliveries of the 3M22 Tsirkon (Zircon), beginning in 2025.

On Tuesday, the Russian Ministry of Defense announced that it had inked a deal on the delivery of the hypersonic missiles.

"A government contract on the delivery of the 3M22 missile (the Tsirkon hypersonic missile) has been signed," the statement said, according to a report from TASS. "The contract has been handed to CEO of the Research and Production Association of Machine-Building Alexander Leonov at the [Army-2021] international military-technical forum."

The Tsirkon is a multipurpose hypersonic missile that is designed to strike sea and ground targets. It was developed by the rocket design bureau NPO Mashinostroyenia. It is reported to be capable of flying at Mach 9, or nine times the speed of sound, and can hit targets more than 1,000 kilometers (620 miles) away.

Russia employed the Tsirkon in a series of tests that began last year—and even included one on President Putin’s birthday on October 8. The most recent test, from the Project 22350 guided-missile frigate Admiral of the Fleet of the Soviet Union Gorshkov, was conducted in July.

The arrival of the missiles into the Russian Navy’s arsenal will follow the delivery of the latest Project 22350 frigates. The frigates are set to become the backbone of the Russian Navy’s surface fleet; two have been completed and are in service while work on six additional warships is currently underway.

Also known as the 3M22 Zircon, the Tsirkon has been in development for more than twenty years and has been seen as a key next step for Putin’s military buildup.

The earliest trials of the Tsirkon were conducted from coastal platforms while subsequent trials included launches from Russian Air Force modernized Tu-22M3 bombers. The sea-based Tsirkon utilizes a multi-stage launch system, which includes a booster, a solid-propellant booster stage, and a scramjet-powered warhead.

Its combination of speed, maneuverability, and altitude could make tracking and intercepting such hypersonic weapons quite difficult. Moreover, the missile’s plasma cloud—which completely covers the vehicle in flight—could absorb any rays of radio frequencies and thus make the missile invisible to radar. In addition to its speed, the missile could also remain largely undetected on its way to a target.

Because of the size of the missile, it may not carry an especially large warhead but it may not need to, especially if the Tsirkon were to be employed against a warship or static target. A hypersonic missile’s speed and force are so significant that it can inflict damage by its sheer ‘kinetic’ impact without even needing explosives.