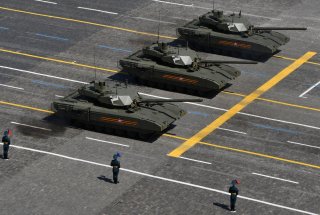 On Monday the Russian military launched the Kavkaz-2020 strategic drills, which will involve more than eighty thousand people in six days of exercises at multiple training grounds in the Southern Military District. Kavkaz—Russian for “Caucasus”—2020 is the last in a cycle of four rotating regional exercises, preceded by ZAPAD 2017, VOSTOK 2018, and TSENTR 2019. These exercises are a means of gauging battle-readiness in each of Russia’s four military districts: Western, Eastern, Central, and Southern, respectively.

The Kavkaz-2020 exercise is being held from Monday, September 21 to Saturday, September 26 within the territory of the Southern Military District, and in the Black and Caspian seas under the direction of Chief of the Russian General Staff Army General Valery Gerasimov.

These most recent drills come just a month after Moscow held its Army-2020 arms fair, the largest annual exposition and demonstration of Russian military hardware.

This year’s exercise will also include foreign military units from Armenia, Belarus, China, Myanmar and Pakistan taking part as well, but the defense ministry said the number of international soldiers totals fewer than one thousand. Additionally, representatives from Azerbaijan, Indonesia, Iran, Kazakhstan, Tajikistan and Sri Lanka are acting as observers.

The Chinese troops will reportedly be drawn from the People’s Liberation Army’s Western Theater Command, whose jurisdiction encompasses China’s disputed border with India.

Strict coronavirus pandemic requirements are being observed throughout the training exercises.

The events kicked off on Monday as more than fifteen hundred officers and soldiers, along with three hundred pieces of military equipment including tactical aviation and drones, took part in exercises at the Alagyaz proving ground in Armenia. It involved Russian and Armenian military units under the commander of the combined military group Tigran Parvanyan.

The commander is evaluating the readiness of the Southern Military District’s forces for localizing and resolving armed conflicts including those related to terrorist activities, as well as for the protection of interests and security of the two nations.

Aircraft Take to the Skies

Russia’s Ministry of Defense announced that the Southern Military District is on combat duty within the framework of the Kavkaz-2020 drills.

“Crews of Su-27 and Su-30SM fighter jets of the Southern Military District are on combat air defense duty at operative airfields in the Republic of Crimea, the Krasnodar, Stavropol and Rostov Regions within the strategic command post drills Kavkaz-2020,” the ministry told state media.

In another part of the exercises, about sixty Ilyushin Il-76 military transport planes have been redeployed to operational airfields to take part in drills, with some flying from up to two thousand kilometers to take part.

“The flights were carried out from the planes’ home airfields in the Tver, Pskov, Orenburg, Ulyanovsk and Rostov regions,” the Defense Ministry told Tass. “About 60 Il-76 military transport aircraft have been moved.”

Another part of the Kavkaz 2020 military exercise will include anti-missile drills against cruise missiles as well as against unmanned aerial vehicles.

“The Kavkaz-2020 drills will particularly focus on combating cruise missiles and unmanned aerial vehicles, as well as on fire and electronic warfare activities against entire enemy formations, on training airborne troops’ vertical envelopment capability and ways to rapidly shift between military activities,” the ministry said in a statement.

The decision was made to include the anti-missile and anti-drone exercises based on experience gained during various armed conflicts including the ongoing conflict in Syria.

Another focus of the drills will be on using weapons and military equipment at different times of the day and conducting deep-penetration raids.

Image: Russian T-14 Armata tanks drive during the Victory Day Parade in Red Square in Moscow, Russia, June 24, 2020. The military parade, marking the 75th anniversary of the victory over Nazi Germany in World War Two, was scheduled for May 9 but postponed due to the outbreak of the coronavirus disease (COVID-19). Host photo agency/Evgeny Biyatov via REUTERS.