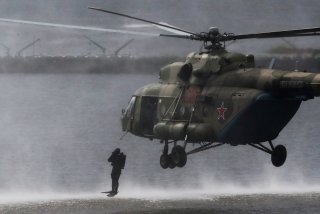 One of the benefits of deploying paratroopers is that these soldiers can infiltrate deep behind enemy lines—and such was the case of German paratroopers during the Blitzkrieg in 1940, which enabled the Nazis to seize key points before the arrival of armor and infantry. The Allies also deployed paratroopers in a similar fashion on D-Day and later during Operation Market Garden.

While gaining the element of surprise, paratroopers often land under-armed and cut off from friendly units. The United States has sought to address that issue with an emerging airborne satellite system that could even allow paratroopers communication via voice, video and data while flying toward their mission—which could enable them to land equipped with better intelligence information to achieve their combat objectives.

Then there is the fact that the technology to detect paratroopers has also gotten better during night time drops. The technology has advanced to the point that paratroopers have become less effective because their chutes can all too easily be seen via night vision goggles and scopes, which is why the Russian military has reportedly been carrying out work to create parachutes that would be invisible to such night vision devices.

This even involves seemingly low tech solutions to making it harder to see the chutes in the sky.

“The effect of chemical spraying for making the parachute invisible for night vision devices on the physical properties of basic fabrics used in the manufacture of parachute systems’ canopies and cords and, correspondingly, the possibility of their use in producing materials for the canopies of parachute systems, are now being studied,”  Igor Nasenkov, CEO of Technodinamika Group, which is part of the state tech corporation Rostec, told state media from this week’s Army-2020 International Military and Technical Forum outside of Moscow.

While not true stealth—as it is unclear if the parachutes would show up on radar if a group of soldiers dropped together in close proximity for example—the stealth-like effect is achieved through the use of applying special saturating techniques at the stage of producing polyamide threads and fabrics. Nasenkov added that there are already samples of materials for the manufacture of parachute backpacks that will be invisible to night vision devices.

A less visible parachute is just one of the innovations in the technology that is reportedly being developed and potentially deployed from Technodinamika. The company also introduced parachutes for Russia’s Ratnik combat gear, which will feature a unique suspension system is designed to prevent a soldier from accidental drowning during a water landing.

“The rapid release parachute locks are used in the new suspension system for the D-10 parachute system,” Nasenkov explained to Tass. “A full cycle of tests has been completed. The suspension system has been reconfigured for the Ratnik combat gear and can be promptly adjusted for each individual soldier.”

The suspension system, which utilizes two rapid release locks, will ensure an instant separation from the parachute should the soldier land in water or need to quickly get out of the harness. However, the safety catches still prevent a casual release during an unintentional impact.

The system was designed after two paratroopers splashed down into a body of water in the Crimea and drowned when they couldn’t promptly detach from the parachute system, a subsequent investigation later found.

Both parachute systems were on display at Russia’s Army-2020 International Military Technical Forum, which opened at the Patriot conference and exhibition center on August 23 and will run until August 29.