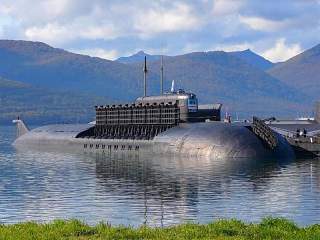 But in attempting to counter the Russian subs, the United States and NATO should avoid slipping back into its own Cold War ways, warned Andrew Metrick, an analyst with the Center for Strategic and International Studies in Washington, D.C.

Specifically, the Western alliance should not reinforce the geographic chokepoint between Greenland, Iceland and the United Kingdom, Metrick advised. A response centered on the so-called “GIUK Gap” “risks misprioritizing future investments.”

“In the past few years, Russian submarine activities have become a focal point for U.S. and NATO planners, part of the larger discourse on Russia’s revanchist role in the wake of its illegal annexation of Crimea,” Metrick wrote.

“Several military leaders have observed that Russian activities in the undersea domain have reached the highest levels seen in 20 years, and this heightened pace of operations has set off alarm bells from the United Kingdom to Finland and spurred comparisons to the Cold War.”

During the Cold War, Soviet submarines needed to pass the GIUK Gap in order to reach the open ocean and close within striking range of NATO ports and ships. That’s not the case with newer Russian subs with their longer-range weapons.

“Russian submarines no longer have to transit the gap to have a dramatic impact on the European military balance,” Metrick wrote. “Rather, they can operate from the relative safety of bastions in the Norwegian and Barents seas and strike targets across Northern and Central Europe.”

Assuming budgets remain at their current level, in the 2020s the Russian submarine fleet could include up to 10 Yasen-class guided-missile submarines plus upgraded Kilo, Akula, Oscar and Sierra attack submarines, for a grand total of probably around 50 vessels.

To respond adequately, the United States and NATO must move beyond the outdated barrier-defense concept and fully embrace open-ocean ASW, with far greater emphasis on operating in contested waters well north of the Arctic Circle. Instead of static ASW barriers, the United States and NATO must shift to a model of mobile ASW nets that can be rapidly constituted and focused on likely areas of operation.

This will require developing a new generation of ASW capabilities. Chief among potential systems are large unmanned underwater vehicles with considerable on-station time to provide initial cueing for other ASW assets. In addition, the [U.S.] Navy will need a new family of disposable acoustic ASW payloads.

A major element would be small, disposable UUVs and unmanned surface vessels deployed by ships, aircraft, submarines, or large UUVs that could quickly be seeded into an area and provide persistent ASW coverage for upward of a week.

These new capabilities will be effective only if they are paired with a new networking concept that knits together aerial, surface, and subsurface assets to understand the undersea battlespace. This is a daunting technical challenge, likely achievable only if subsurface platforms have considerable onboard processing and analytic capacity and are supported by persistent communication nodes.