Russian Navy to Get Nuclear-Powered Aircraft Carrier? The Answer Is Nyet. 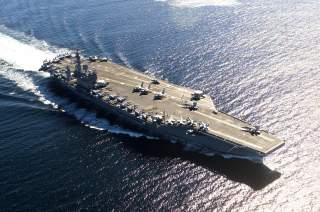 The Russian navy has revealed a scale model of a possible, nuclear-powered replacement for its sole aircraft carrier, the conventional Admiral Kuzentsov.

Butt the Kremlin for years has celebrated scale models of future flattops, all without spending any money to actually design or build the vessels.

The longer the Russian navy waits, the less likely it is that a new carrier directly will replace Kuznetsov when the aging, unreliable ship finally decommissions.

A defense-industry source said the Kremlin had begun a technical assignment for a future nuclear-powered carrier under program name Project 11430E Lamantin, TASS reported in July 2019.

But the Russian navy’s own commander-in-chief, Nikolai Yevmenov, told reporters there was no firm deadline for funding or construction. "There will be, of course, a nuclear-powered aircraft carrier but not in the short-term perspective," Yevmenov said.

The model of the Project 11430E carrier indicates a large vessel similar in size and layout to the U.S. Navy’s own nuclear carriers. The 1,100-feet-long Lamantin would displace up to 90,000 tons of water, boast a three-month endurance be capable of a top speed of around 30 knots, TASS reported.

It’s unclear how much Lamantin would cost. The United States possesses an efficient carrier-building industry that produces a new flattop roughly every five years and still spends as much as $13 billion per vessel.

The high cost of a replacement vessel perhaps explains why the Kremlin is determined to keep Kuznetsov in service as long as possible. The Russian navy plans to dry-dock Kuznetsov starting in 2020 and conduct extensive repairs on the 1980s-vintage vessel.

A previous effort to dry-dock and repair Kuznetsov ended in disaster in October 2018. The carrier suffered serious damage at the 82nd Repair Shipyard in Roslyakovo, a northern port city, when the PD-50 dry-dock sank.

According to the newspaper Izvestia, the Kremlin considered just decommissioning Kuznetsov rather than spending the money to acquire a new dry-dock, move an existing dock or the carrier or find some other way of repairing the accident-prone flattop.

“Not everyone considers the continuation of repair to be appropriate,” a navy source reportedly told Izvestia following the PD-50 sinking. “There are different opinions, including those that boil down to the fact that with this money it is better to build a pair of frigates or a nuclear submarine.”

But there was intensive pressure to keep the carrier, two experts explained in Proceedings, the professional journal of the U.S. Naval Institute.

A new nuclear-powered carrier costing one-fifth of Russia’s entire annual military budget might be an even bigger albatross. Not that Russia is likely to build such a vessel any time soon.