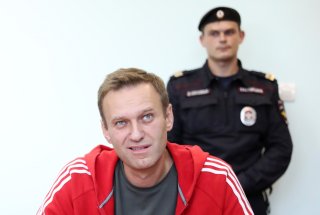 On Tuesday, imprisoned Russian opposition leader Alexei Navalny, who is currently serving a nine-year prison term within the country, announced that he is facing new accusations that could extend his sentence by an additional fifteen years.

The Russian dissident made the announcement on his Russian-language Instagram page, which he remotely maintains from within prison through regular visits with his lawyers. He indicated that the charges were related to “creating an extremist group to fan hatred against officials and oligarchs,” as well as attempting to violate Russian restrictions on lawful assembly.

Navalny described the prospect of an additional fifteen years in prison as “another 15 years of a reliable, stable bunker where I’ll be sheltered from the surprises and misfortunes of … ‘freedom.’” He added that he and Russian leader Vladimir Putin were similar in this regard, as both of them had been “hidden in an underground bunker” since the onset of Russia’s invasion of Ukraine on February 24.

Since his unexpectedly strong performance in Moscow’s mayoral election in 2013, Navalny has emerged as Russia’s most high-profile opposition figure. During the 2010s, he pursued initiatives such as the “Smart Voting” scheme intended to coordinate opposition to United Russia, Putin’s political party, and founded the Anti-Corruption Foundation, a Russian nonprofit dedicated to exposing government corruption. A court order shut down the foundation in 2021.

In August 2020, Navalny was poisoned with Novichok, a nerve agent connected to the Russian government and infamous for its use in the attempted poisoning of Russian double agent Sergei Skripal. After recovering in Germany, he was arrested upon his return to Russia, as his bail conditions from a prior conviction forbade him from leaving the country. For this violation, Navalny was initially sentenced to thirty months in jail; the sentence was later expanded to nine years after he was convicted on additional counts of fraud for allegedly using campaign funds for personal use during his previous political career. Navalny has denied the charges, describing them as a transparent attempt by Russian authorities to keep him in prison.

Following Russia’s invasion of Ukraine, the Kremlin has taken a harsher line against political dissidents. The government arrested tens of thousands of anti-war protesters at the outset of the conflict. It charged some under a new law that forbids insulting the Russian armed forces, in which nearly any criticism can constitute an insult. Independent Russian newspapers and television outlets, including the Novaya Gazeta and Rain TV, have suspended publication during the conflict or shut down altogether. Many of Navalny’s associates have fled Russia to evade criminal charges.