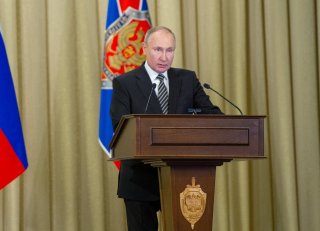 On Thursday agents from Russia’s Federal Security Service detained Alexander Kuranov, chief designer and CEO of the St. Petersburg-based open stock company Hypersonic System Research Institute. The seventy-three-year-old is a leading specialist in hypersonic technology and will reportedly be held for two months in pre-trial detention on charges of suspicion of state treason.

It is the latest in a series of such cases in Russia.

Kuranov is also a doctor of technical sciences and professor of control systems and technologies at St. Petersburg Polytechnical University. He has overseen work on the concept of new hypersonic aircraft, which were dubbed Ayaks (Ajax), which date back to the Soviet era.

According to TASS, the press service of Moscow’s Lefortovo court had confirmed the investigators’ request had been received but refrained from elaborating on the details of the criminal case.

Kuranov's work was focused on hypersonic technology including aircraft. Russia has put a major focus on the development of hypersonic weapons, which President Vladimir Putin has publicly described as “invincible.” The Russian Federation leader announced the development of a series of new hypersonic weapons platforms during his 2018 state of nation speech when he said the weapons could hit targets in the United States and even evade missile defenses.

Efforts to develop such weapons predate Putin’s term in office and were first considered during the Soviet Union in the latter stages of the Cold War. This included the aforementioned Ajax system, which first entered development in the 1970s. Kuranov had been working on hypersonic technologies for years.

“The main objective of our company is the development and extensive use of the new hypersonic technologies that are to become the basis for the creation of aviation and aerospace engineering of the new generation,” the institute stated on its website.

The seventy-three-year-old expert on the technology had also reportedly, “shared classified information about scientific research with a foreign citizen,” Interfax reported, which cited a source with knowledge of the investigation. The report added that Kuranov may have had “meetings and interactions with foreign citizens” that were related to the Ajax program.

During his two months in pre-trial detainment, Kuranov may not be able to mount a reasonable defense. The Guardian newspaper reported that Russian authorities have begun to target lawyers who specialize in representing defendants in treason and espionage cases. That included Team 29, an association of lawyers who handled such cases, which was forced to close last month under state pressure.

Kuranov could be looking at a lengthy prison sentence if convicted. State treason is punishable by up to twenty years in jail in Russia. Such a sentence was handed down to an aviation lecturer from Moscow this past April after he was found guilty of illegally exporting technology and technical information.

A number of Russian scientists, soldiers, and government officials have also been charged with treason in recent years after being accused of passing sensitive material to officials in foreign countries.