Russian S-400s Have Been Deployed to Southern Belarus 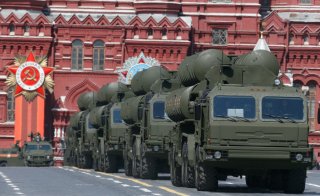 A Russian battalion of S-400 "Triumf" anti-aircraft missile systems was recently deployed to a training ground in southwestern Belarus. The advanced air defense system was sent in advance of a planned joint exercise, the Russian Ministry of Defense announced Friday

"A battalion of S-400 ‘Triumf’ surface-to-air missile systems of the Eastern Military District's Air Force and Air Defense Army involved in an inspection of the Union State’s Response Force has arrived at the training ground in the Brest region in the Republic of Belarus," the ministry said in a statement.

Moscow has touted the capabilities of the S-400 and claimed that it is capable of tracking and hitting stealth platforms, including the F-35 Joint Strike Fighter.

The S-400 system was developed by Almaz-Antey to provide protection from airstrikes, including cruise, tactical, and intermediate-range missiles. The missile platform can also be used against ground installations.

The S-400, which can also launch 40N6 missiles, was designed to engage targets at a distance of up to four hundred kilometers and an altitude of up to thirty kilometers under intensive enemy fire and jamming. The system entered service in 2007.

The inspection of the Russia-Belarus Union State's Response Force will reportedly run in two stages. During the first, which will be completed prior to February 9, the Belarusian and Russian militaries will practice troop deployments against a notional enemy. During that initial stage, the troops will check air defense quick reaction alert forces and practice defending vital facilities and the state border in the airspace.

During the second stage of the inspection, which is scheduled to run from February 10 to February 20 as part of the Union Resolve 2022 joint drills, the troops will practice fighting and repelling “external aggression”, counter-terrorism operations, and protecting the “interests of the Union State.”

According to the Russian Defense Ministry, the forces will also practice reinforcing the state border from illegal penetration by "armed gangs," shutting down supply routes for arms, and eliminating hostile forces.

The troops will practice their joint operations at the Domanovsky, Gozhsky, Obuz-Lesnovsky, Brestsky, and Osipovichsky training grounds. The Baranovichi, Luninets, Lida, and Machulishchi airfields will also be used for the drills.

All of this will take place as Russia continues to mass its forces on the border with Ukraine. In addition, the deployment of the air defense systems comes on the heels of NATO’s decision to move combat aircraft to Poland.