Russian Troops in Venezuela Are a Joke, Not a Threat 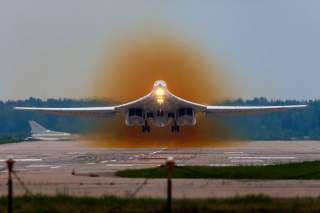 In fact, Russian troops in Venezuela barely rate as a crisis at all.

The Trump administration is up in arms over an estimated 100 Russian troops and military advisers that were airlifted into Venezuela in March to support the embattled government of Nicolas Maduro. “Russia’s got to leave Venezuela,” declared Secretary of State Mike Pompeo, while National Security Adviser John Bolton warned that other nations shouldn’t establish military bases in the Western Hemisphere.

It is understandable that Washington would be unhappy about Moscow’s support for a regime it would like to see overthrown. Or that Venezuela has spent billions on Russian arms, including jet fighters, helicopters and anti-aircraft missiles. Or that a pair of Tu-160 nuclear bombers has flown from western Russia to a Venezuelan airfield in a symbolic display of Russian aerial might.

But how big a threat to U.S. security is a handful of Russian troops permanently stationed in Venezuela? Not much.

To really threaten the continental United States from Venezuela, Russia would have to be capable of projecting power 1,400 miles—the distance from Caracas to Miami—or at least far enough out to threaten shipping lanes or the Panama Canal. That would mean putting missiles or long-range bombers like the Tu-160 and Tu-22M3 in Venezuela, or shorter-range tactical jets supported by air tankers. A deployment of that size would be noticed by U.S. intelligence. No White House administration could tolerate it, especially after word inevitably leaked to Congress and the press.

Venezuela as a permanent Russian naval base, like the port of Tartus in Syria, is another possibility. That is, if the Russian Navy is capable of permanently operating a squadron in the Western Hemisphere. But again, any base that could service a large number of surface ships and nuclear submarines would be intolerable to Washington.

As with Cuba or Nicaragua during the Cold War, a Russian outpost in Venezuela could function as an intelligence base in Latin America, or as a staging point to foment political conflict in the region. But that’s hardly an existential threat to the United State.  And even then, too active a Russian presence would only energize Americans who wouldn’t mind sending the Marines for regime change in Caracas.

A pro-Russian Venezuela would be useful to the Kremlin in terms of prestige, a presence in South America, and a bit of payback for all the pro-U.S. and NATO nations that are on Russia’s borders. The oil-rich nation is also a lucrative market for Russian weapons, though it already owes Russia $3 billion for past arms purchases (which is one reason that Moscow doesn’t want to see Maduro go).

But ultimately, a strong Russian military presence in Venezuela doesn’t make sense unless Russia is prepared to guarantee Venezuela’s security. And how far would Russia go to protect Venezuela? Cuba survived as a Soviet bastion because much as the United States wanted to get rid of Castro, it wasn’t worth risking World War III. What would Moscow do if Washington chose to invade Venezuela, even if Russian boots were on the ground there? Retaliate by invading Latvia? Putin may brandish his bizarre atomic-powered cruise missiles and nuclear-armed robot subs, but he’s not going to risk having Moscow nuked to save Caracas.

President Donald Trump’s critics gleefully point to Candidate Trump’s denunciations of Barack Obama for setting red lines over Russian military intervention in Syria, and then doing nothing while the Kremlin sent in troops that saved Bashar al-Assad’s brutal regime. So, they ask, what’s Trump going to do about Russian troops in Venezuela?

The answer is that Trump doesn’t have to do much of anything. Venezuela is an economic and political basket case that Russia is in no economic condition to support. Russian troops in Venezuela are not going to topple neighboring governments in a Latin American Domino Theory. And a hundred Russian soldiers in Venezuela are a cheap way for Moscow to thumb its nose at Washington, but they are more pantomime than threat.