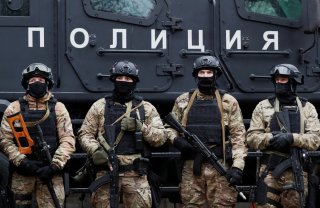 While Russian forces have poured into Ukraine in the last week, little attention is given to conflict thousands of miles away in Africa. Yet upon closer inspection, Russian mercenaries have proliferated across Africa in recent years. These mercenaries were initially tasked with guarding government officials and securing crucial mining areas. However, as the world watches the Russian Army commit possible war crimes in Ukraine, citizens of many African countries have watched as mercenaries massacre civilians and helped enrich Russian president Vladimir Putin and his associates. Any sort of strategy to force Putin to leave Ukraine must address these mercenary activities that bring in geopolitical capital, as well as cold, hard cash for the Russian Federation.

These mercenaries are associated with the Wagner Group, a Russian private military contractor. Wagner is widely believed to be owned by Yevgeny Prigozhin, a close associate of Putin. Prigozhin’s mercenaries have allowed the Russian government to pursue its strategic interests with plausible deniability. Private military companies are illegal in Russia, thus, Wagner does not officially exist. This mutual benefit between the Russian government and Prigozhin himself leads to mercenaries being used in Africa to help shepherd arms sales. The Russian government has also gained access to valuable minerals and strategic positions through Prigozhin and Wagner. For example in 2017, Wagner mercenaries put down uprisings against Sudanese president Omar al-Bashir. In exchange, Prigozhin gained exclusive rights to gold mining in Sudan. Russian support for al-Bashir also led Sudan to offer a naval base on the Red Sea to Russia in 2019.

However, Wagner forces engaged in regime preservation are not bound by any rules of conventional warfare. For some rulers, that is precisely their appeal. Torture, rape, and mass executions in the Central African Republic’s (CAR) ongoing civil war have involved Wagner mercenaries. Journalists that have been dispatched to report on Wagner Group activities in the CAR have also been killed. Similar to Sudan, a company linked to Prigozhin received diamond and gold mining licenses in the CAR. CAR president Faustin-Archange Touadera even has a former member of the Russian state security service as his security advisor, serving as a crucial political link for the Kremlin. Civilians in the CAR have taken the brunt of abuse by these mercenaries with Wagner mercenaries even turning back a UN official attempting to investigate alleged war crimes in the country.

Wagner mercenaries have capitalized on both Western indifference and a pullback of former colonial forces in several African countries. Russia successfully pushed France aside after the former colonial power suspended its initial military intervention into the country to stop the civil war. Wagner’s next client, the military junta currently running Mali, has reached a deal that will pay Wagner $10 million a month for the mercenaries to pick up where the French left off in a fight against jihadists. Wagner also gained access to three gold mining sites in the country after renewed bilateral relations between Mali and Russia. The Soviet Union once enjoyed significant sway in Africa; Wagner is helping Russia regain influence via military muscle and resource access.

With so many highly-sought resources in countries that lack basic security, this is an opportunity for the West to beat back Russia’s illicit influence campaign and make inroads in the developing world. The United States can spearhead a response by working to publicize the Wagner Group’s atrocities further and work with allies to introduce greater transparency into origins of gold, diamonds, and other minerals from countries affected by violence. Diamond giant De Beers has leveraged its mining, processing, and technology capabilities to offer miners on the ground safe transportation routes, virtual sales, and tracking equipment to ensure miners do not pass along conflict diamonds to market. Combining these business incentives with security arrangements will give the United States access to key rare earth elements in Africa and would be much more profitable for African countries to sell than access to precious stones.

With the war in Ukraine expected to drag on for the foreseeable future and economic sanctions wreaking havoc on the Russian economy, the Russian government will likely attempt to secure more sources of gold as the ruble falls. Russia itself will suffer from import and export controls, but mining operations outside the country will still be able to secure funds for the regime. Russia is already preparing to weather sanctions using gold secured in tandem with the Wagner Group mercenaries. Leveraging the international market to rid the Wagner Group and Russian mining operations from Africa will tighten the screws on Putin himself and fight back against mercenaries gouging citizens in countries throughout Africa.

Roy Mathews is a contributor for Young Voices and a graduate of Bates College. He has previously been published in The Daily Signal and RealClearWorld.