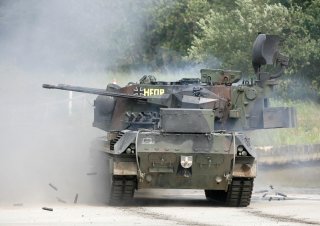 Germany recently stood up its first-ever homeland security regiment, a new force that the Bundeswehr would activate in times of national crisis.

Federal Defense Minister Christine Lambrecht attended the standup event. In her speech, the minister referenced the war in Ukraine, explaining that Russia’s aggression makes it clear that Germany can no longer assume it is surrounded by friendly nations and must reinvest in a neglected national defense capability. "We must increase and sustain the operational readiness of our armed forces in the shortest possible time," the minister remarked in her statement. "National territorial defense and homeland security are core components of national and alliance defense." She added that reservists would play an important role in homeland defense. "Those who want to live permanently in peace and freedom need military strength and deterrence,” she explained. “Putin has taught us that.”

In a statement covering the event, the Bundeswehr explained that “by 2025, a total of five homeland security regiments are to be established in Germany,” and summarized what the regiments’ role would be. “The reservists of the homeland security regiment can be called up in an emergency, for example in the event of defense or a nationwide power blackout, and protect critical infrastructure such as important bridges or Bundeswehr facilities.”

Though the number of reservists currently number about 350, their ranks are expected to ultimately swell to about 450 in total. The Bundeswehr also explained that the Landesregiment Bayern (Bavarian state regiment) would be renamed Heimatschutzregiment 1, adding that its seven companies, plus a headquarters and logistics company would also be joined by a special infantry, reconnaissance, and engineering capability.

Germany is in the midst of what is perhaps the most significant military restructuring it has experienced since the end of the Cold War. Though Berlin has steadily and significantly underinvested in its armed forces, the Russian reinvasion of Ukraine has clearly demonstrated the necessity of a functional and effective military.

German chancellor Olaf Scholz promised to invest one billion euros into the armed forces, a previously unprecedented sum. However, how exactly that investment is used—and if Berlin ultimately spends the entire sum—remains to be seen.

Though Germany initially balked at sending weapons of any kind to Ukraine, Berlin has since backtracked and sent a modest amount of weaponry to Kyiv’s aid. However, Germany’s assistance has been criticized for being old, without ammunition, in need of repair, and in some cases, a divestment of old Bundeswehr stocks rather than a good-faith military aid donation.