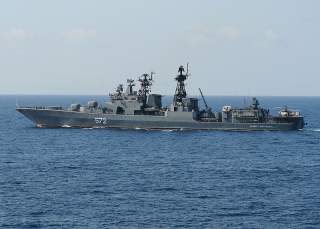 Unless the Russian navy is hunting for the Red October in the eastern Mediterranean, it is likely that so many Russian ships have remained there since the end of Moscow’s latest naval exercise there primarily to support Syrian dictator Bashar al-Assad, Pentagon officials said.

- More than a dozen Russian ships have massed close to Syria, and many of those vessels are equipped with KALIBR cruise missiles, Pentagon spokesman Eric Pahon said.

-“The question remains, then, why is Russia’s naval presence still elevated in the region?” Pahon told Task & Purpose. “Is there another reason?”

- The Assad regime is currently poised to launch a massive assault against rebel-held Idlib province and Russian ships have previously launched cruise missiles in support of the Syrian regime.

- “The United States and its allies are greatly concerned about the terrible humanitarian crisis that would result if the Syrian regime, with Russian backing, launches an attack on the densely populated Idlib province,” Pahon told Task & Purpose. “The Assad regime and its operational backer, Russia, bear full responsibility for the humanitarian consequences of an offensive in Idlib.”

- Speaking to reporters on Tuesday, Defense Secretary James Mattis declined to say how the U.S. military might respond if Assad orders his forces to use chemical weapons in Idlib. “He’s been warned,” Mattis said. “The first time around, he lost 17 % of his pointy-nosed air force airplanes. So we’ll see if he’s wised up.”

It’s worth noting that the rising tensions in Syria coincide with amphibious assault ship USS Essex’s long-planned deployment to the Middle East with F-35Bs, which are currently taking part in two weeks of combat exercises off the Horn of Africa. And since Israel has already used its version of the F-35 in combat in Syria, it could the by Flying Leathernecks’ turn if Assad uses chemical weapons again.

What Regime Change in Syria Would Mean