Is This Russian Way of War a Game-Changer? 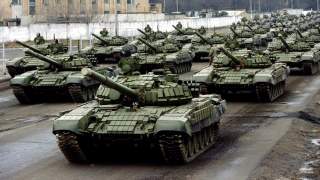 While many of the lessons learned by the Russian military in recent conflicts have been kept internal, the development of the Разведывательно-огневой контур (Reconnaissance/Fire Contour or RFC) has been pretty widely publicized. Official sources such as Krasnaya Zvezda (the official newspaper of the Russian MoD) have put out accounts of the RFC and how it was developed and employed.

But is the RFC a real game changer? Does it improve upon Western artillery usage, or does it simply modernize old Soviet artillery command and control mechanisms for the modern age? RIA Novosti presented a piece on the evolution of the Russian artillery.

The older technique called “fire shaft” described in that history could be considered a Soviet version of the rolling/creeping barrage technique used by Allied armies during WWI. A barrage is fired onto enemy lines, and troops are advanced immediately afterward while the enemy is still recuperating. The article states that this tactic was first used in February 1941, despite it being a staple technique in the British Army for far longer.

The article then describes the tactic that augmented the fire shaft, the “mobile fire zone,” where shells are continually fired to sweep a zone directly in front of an advancing column of troops. The entire column is assumed to be armored, either in the form of a tank unit or infantry inside of IFVs, so the barrage can be fired in very close proximity to the advancing troops. The mobile fire zone is optimized for a quick breakthrough without prior artillery preparation.

Both of these tactics are optimized for the type of warfare the Soviet Union expected to undertake in a war with NATO, breaking through NATO defensive lines across Europe. Their usage requires a massive massing of artillery guns, the setup of complex lines of communication, and the stockpiling of ammunition to maintain massive volumes of fire.

In recent operations, there has been less of a need for breaking through static heavily defended positions and more of a need for rapid “on the fly” artillery support. There has also been the need to “get more done with less,” given that Russia is trying to minimize casualties of its own troops and the cost of running wars. This is why the massive formations of artillery and expenditure of ammunition required by previous tactics are considered to be undesirable in recent conflicts.

As a result, the new tactic of the RFC has evolved. Targets are passed from artillery scouts to an automated control system, which then determines the coordinates of the target and then passes them to artillery units in the area, prescribing fire missions depending on the target and the types of artillery systems available.

One aspect that’s played up by Russian accounts of RFC is the use of UAVs for artillery spotting. The Krasnaya Zvezda article says that drones of “various classes” are used in RFC, including the Orlan-10 which has seen significant use in Syria. However, the exact mechanism through which drones are used for artillery spotting is unknown.

A 2017 publication by the Foreign Military Studies Office, The Russian Way of War, elaborates on possible ways Russia could use UAVs to spot for artillery. The most primitive way of determining the position of an enemy using a UAV is to describe its position relative to a terrain feature, which can be located on a map. This method is not very accurate but is very fast and easy.

Another method is simply flying the UAV over the target and logging the UAV’s self-reported coordinates when it passes over the target. This one has the greatest risk of the UAV being shot down or forces being alerted to the fact that they are being observed, but this method is rapid and can produce accurate coordinates.

Other methods include using a laser rangefinder and digital compass, which can be used to triangulate the exact coordinates that were ranged. This method has a great risk of detection by laser warning receivers. The final method is that with a digital compass, a UAV can take multiple azimuths and then use its self-reported location to determine the probable coordinates that the UAV is looking at.

The Orlan-10 is likely only able to use the first two methods, although more advanced UAVs may be able to use all four.

In the end, RFCs are nothing new to Western militaries. Due to the fact that a Soviet attack could come from anywhere, and considering counter-insurgency experiences in Vietnam, Western militaries focused more on the reactive use of artillery and developed tactics similar to RFC. In a way, the new name and hyping up of RFC is just putting a fresh coat of paint on an already existing tactic.