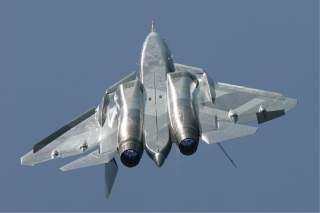 The Russian air force received around 100 new aircraft in 2018 and, under current plans, should get another 100 in 2019, the Kremlin announced.

The steady acquisition of new warplanes and helicopters has helped the air force to boost to nearly two-thirds the proportion of its roughly 3,600 aircraft that it considers "modern," the Kremlin stated in a January 2019 announcement.

But Russia is acquiring new military aircraft at a rate much lower than is its main rival the United States. And in stark contrast to America's own aircraft procurement, Russia's acquisitions include no radar-evading stealth aircraft.

In addition to the air force, Russia possesses a small naval air arm operating around 300 aircraft. The Russian army doesn't have its own air arm. Instead, the air force supports the army with transports and attack helicopters and aircraft.

The U.S. military's own aircraft holdings dwarf those of Russia. The U.S. Air Force, Navy, Marine Corps, Army and Coast Guard together operate around 13,500 aircraft, nearly 10,000 more than Russian armed forces possess, according to the 2018 edition of Flight Global's annual military aircraft survey.

In 2018, the U.S. Defense Department acquired more than 300 aircraft as part of its overall $612-billion annual budget. For 2019 Congress gave the Pentagon $686 billion, some of which it spent buying another 300 aircraft.

In recent years Russia's military has spent between $60 billion and $70 billion annually. A dollar buys more in Russia than it does in the United States, making it difficult directly to compare the two countries' budgets.

But the raw numbers of new aircraft tell a story. As many military aircraft wear out after 30 or 40 years, armed force must replace between two and three percent of their planes and helicopters on average every year in order to maintain overall inventories over the long term.

Both Russia and the United States lately have done exactly that -- purchased a number of new aircraft every year that's sufficient to replace two or three percent of their respective fleets.

But Russia's new aircraft are less technologically advanced than America's are. All of the new fighters Moscow has bought in recent years are versions of the Su-27 that first entered service in the early 1980s.

In 2018 Russia canceled mass production of its first new warplane in a generation, the stealthy Su-57. The Kremlin ordered its first dozen production-standard Su-57s in August 2018, hoping to form the first regular squadron some time in 2019.

But with military budgets flat amid an economic slump, Moscow decided to not acquire the plane in large numbers. The Kremlin tried to spin the decision as good news. “You know that today the Su-57 is considered to be one of the best aircraft produced in the world,” Yuri Borisov, Russia’s deputy defense minister, told a T.V. audience. “Consequently, it does not make sense to speed up work on mass-producing the fifth-generation aircraft.”

By contrast, the Pentagon steadily has been ramping up production of its own F-35 stealth fighter. The 2019 budget included 90 of the radar-evading fighters for the Air Force, Navy and Marine Corps. The U.S. military plans to acquire as many as 2,300 F-35s through the 2040s, while also developing two new fighter types to replace the Air Force's 180 F-22 stealth fighter and the Navy's 600 F/A-18E/Fs.

Even if the Kremlin reversed its decision prematurely to halt Su-57 production, it could take decades for Russia to acquire a few hundred of the planes -- by which time the United States might possess thousands of F-22s, F-35s and other stealth aircraft.

So while Moscow might boast about the 100 new aircraft it bought in 2018 and plans to buy in 2019, in fact the Russian air force is managing only to maintain its overall aviation inventory with non-stealthy designs. The United States meanwhile is preserving its own, much larger force -- and with large numbers of the latest radar-evading aircraft.