Russia's Air Force Has a Weakness It Can't Easily Fix 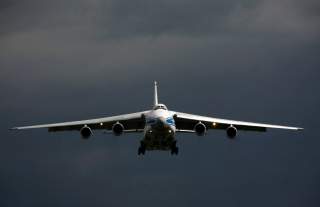 Even as President Vladimir Putin tasks the Russian air force with hauling supplies and personnel to support the Syrian government and the Russian expeditionary force keeping it in power, two recent articles in Russian defense media paint a picture of the Voyennaya Transportnaya Aviatsiya, or VTA—the military’s air transport command—that’s short of aircraft and has difficulties maintaining the planes it has.

“We must admit that most of the aircraft fleet was built during the Soviet era or in the ‘90s,” writes Oleg Falichev in the Russian defense journal VPK. “These are outdated An-12, An-22, An-26, An-72, An-124 and Il-76 aircraft of various modifications. Many of them are almost exhausted.”

"The enormous size of American transport aviation is due to the global nature of the tasks facing the US Armed Forces, especially since all these tasks are being solved outside North America," Alexander Khramchikhin, deputy director of the Institute of Political and Military Analysis in Moscow, writes in the defense journal NVO. “We seem to have no such scope, although, as events in Syria show, it may well sooner or later appear.”

Russia “needs a long-term, systematic aviation development program, not just for military but also civilian aviation,” Falichev argues. “Without it, Russia will stop calling itself an aviation power and will continue flying in ‘Boeings’ and ‘Airbuses.’”

Not everyone is convinced. Russian Defense Policy, an anonymous blog written by an ex-U.S. Department of Defense analyst, labeled Falichev’s article as a “less-than-convincing ‘infomercial’ supporting renewed production of the Soviet-era An-124 heavy transport by Ilyushin.” The blogger also questions Falichev's figures on the readiness of the air transport fleet.

Nonetheless, the former U.S. government analyst agrees that Russia's air transport force has severe problems. “Parlous is the best word to describe the state of Russia's airlift,” he told the National Interest in an email. “The An-124 was devised at a time when Moscow wanted to compete with Washington throughout the Third World. The Il-76 was more generally useful. Built to service the VDV but good for lots of uses. Just limited in what it could carry. Falichev had surprisingly little to say about the Il-76MD-90A or Il-76MDM—programs that may be struggling. As if there weren’t way too much on the plate already, VTA also has to think about a new medium transport, possibly the Il-114 or Il-214 (Il-276). And lots of Il-112Vs to replace An-12s and An-26s.”

All of which means that revitalizing Russia’s airlift capability will be a challenge, but a necessary one if Putin wants to maintain Russia's overseas muscle. “Have you seen the transport ships it has used on the ‘Syrian express?’” the Russian Defense Policy blogger asks. “It’s nothing short of miraculous that an An-124 or Il-76 hasn’t crashed. But one will.”