Russia's Ancient T-54 Tank Keeps Fighting (Did We Mention How Old It Is?) 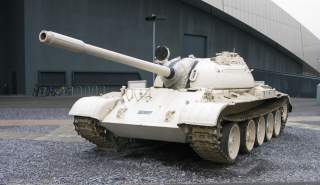 Like the AK-47 but for tanks, T-54 and T-55s endure on battlefields around the world. Simple to operate and maintain, these decades-old Soviet armored beasts are still popular in small nations and with non-state irregular forces — a true “people’s tank.”

If a coup or fratricidal civil war breaks out in one of Moscow’s current or former beneficiaries, there’s good chances T-54 or T-55s are taking part.

When Afghanistan collapsed in the 1990s, the Taliban and Northern Alliance coalition both inherited T-55s formerly belonging to the communist government. The tanks served in Yugoslavia’s multi-sided civil war during the same decade.

Today, captured Iraqi and Syrian T-55s serve under the black flag of Islamic State and other rebel groups fighting in the region. For these insurgent armies, the 60-year old tanks are just as useful as far more modern designs such as the M1 Abrams.

Because most of the time, tanks don’t need to be complicated. Cheap, uncomplicated and deadly enough is sufficient for most 21st century wars.

At the end of World War II, the Soviet Union’s tank arsenal consisted largely of T-34/85 medium tanks, along with smaller numbers of IS-2 and IS-3 heavy tanks. While the T-34 series had performed outstandingly in the war against Nazi Germany, the Soviets considered its leaf spring suspension and 85-millimeter gun to be outdated.

The later IS-series tanks — standing for Iosif (Joseph) Stalin — had proven themselves more than a match for Germany’s best Panzers. Unfortunately, the crews had to load huge 122-millimeter shells and propellant charges separately into the cannon, giving the vehicle a low rate of fire and ammunition reserve.

The Soviets built the more obscure T-44 — which did not see combat action — in an attempt to reduce the T-34/85’s profile with a squat turret and a sunken hull structure. However, the small size made it impractical for engineers to fit a 100- or 122-millimeter weapon.

The desire for a fresh design led Kremlin weaponeers to create the T-54 and improved T-55 medium tank. Today, these steel monsters remain the most common tanks in the world.

For nearly a decade prior to the more recognizable T-54A’s appearance in 1954, the Soviets had already built predecessor models known as the T-54–1, -2 and -3 in modest numbers. These versions usually had a counterweight on the main gun muzzle rather than the distinctive bore evacuator — a device that keeps noxious fumes from blowing back into the turret.

It’s hard to tell the difference between the different models, but looking for these features is the easiest way. The pre-production turrets had cutaways on their front and rear undersides, but the Soviets gradually eliminated these design quirks, as they could inadvertently deflect incoming rounds into the hull.

In addition to the evacuator on the barrel, the T-54A was the first of the series to have a vertical stabilizer for the main gun. The T-54B went a step further with both horizontal and vertical gun stabilization.

The T-54’s diminutive turret kept the overall height to a mere 2.39 meters, making the tank shorter and harder to hit than the contemporary American M-48 Patton. The curve of the turret also helped to deflect incoming rounds.

T-54s first saw action in 1956 in Hungarian capital of Budapest, when the Soviets used them to crush rebels who had overthrown the local pro-Soviet regime. But the debut took a humiliating turn when Hungarian rebels drove a captured T-54 into the British embassy, giving Western experts an up-close look at its strengths and weaknesses.

In 1972, North Vietnam launched a major invasion of its southern neighbor — eventually leading to South Vietnam’s capitulation. In a tank-on-tank confrontation at the besieged firebase at Dak To II in Kontum, two South Vietnamese M-41 light tanks fired three 76-millimeter rounds each into a single T-54.

The T-54 took some damage, but easily destroyed the lighter U.S.-made vehicles. After the shooting stopped, the NVA crew calmly exited their T-54 and walked away.

Still, it exposed one vulnerability. The hostile turret conditions reduced the T-54’s practical rate of fire to just four rounds a minute. A competent Western tank crew could shoot off the same number of shells in the first 15 seconds of an engagement.

Even before these outings, Soviet designers had already started working on an improved variant — the T-55.

Obviously, from the outside it’s hard to tell it apart from T-54A and B. Externally, the only reliable clue is the absence of a mushroom shaped ventilation fan on the T-55’s roof.

Most of the new tank’s improvements were internal. The T-55’s PAZ overpressure system helped seal tankers inside and could keep out radioactive dust from a nuclear strike. The Soviets stuffed in another nine rounds for the main gun, too.

Engineers replaced the World War II-era SGM machine gun next to the main cannon with the new PKT. In 1961, the further upgraded T-55A received anti-radiation lining, an air filtration system to scrub out chemical and biological agents and it dispensed with the hull-mounted machine gun.

Another reason why it’s so difficult to tell these tanks apart is because older versions were often rebuilt to the same standards as later ones. For instance, the T-55 originally did not feature an external DShKM heavy machine gun on the loader’s hatch, like the T-54. Soviet commanders found the weapon to be useless against jet fighters.

But these massive automatic weapons returned when the tanks underwent depot refurbishment. Unlike fast-moving jets, new attack helicopters were more likely to engage the tanks at closer ranges and at lower speeds.

While the T-54/55 has become ubiquitous, the tank has typically been on the losing side when fighting comparable or more advanced Western designs. The T-54/55 suffers from abysmal crew conditions, shoots miserably slow, rides bouncily and has a tendency to throw its tracks.

But lackluster training, tactics and leadership — and the superior standards of their Western-backed enemies in the same skills — were more responsible than design faults for the vehicle’s wartime defeats.

Likewise, Syrian T-55s in the 1973 Yom Kippur War greatly outnumbered Israeli tanks — but the Israelis shot the Syrians down in droves from the Golan Heights. As for the liberation of Kuwait in 1991, Iraq left its tanks in stationary, dug-in positions in the desert.

Still, the T-55’s major selling points continue to be simplicity and availability. Factories in the USSR built an estimated 50,000 vehicles and that’s a conservative estimate. Poland and Czechoslovakia assembled thousands more locally. Chinese Type-59 clones only add to the tally.

Specialist T-55 variants with mine-clearing rollers, bridges, flamethrowers and recovery cranes were produced alongside the gun tanks, too. The Soviets used the same chassis for its ZSU-57–2 self-propelled anti-aircraft gun and the newer BTR-T heavy personnel carrier.

In successive wars with its Arab neighbors during the 1960s and 70s, Israel captured hundreds of T-55s. Israeli troops turned the tank — nicknamed Tiran or “dictator” in Hebrew — against its former owners. Engineers eventually swapped out the Soviet main guns with the superior British-designed 105-millimeter L7. With the replacement cannon, the vehicles could use the same ammunition as any other Israeli tank of the day.

When Israel retired its Tirans, some of the hulls became the basis for the Achzarit — literally meaning “cruel” — heavy armored personnel carriers. Other countries added their own indigenously-manufactured components for both domestic and export use. Some of these local variants, such as the Romanian TR-85M, have little resemblance to the Kremlin’s original design.

And Russia has also produced upgraded T-55M and T-55AM tanks incorporating BDD composite armored “eye brows” on the front of the turret and spaced laminate plates to the glacis. The vehicles’ features include updated laser range finders, ballistic computers and sights.

These refurbished T-55s can launch long-range 9M117 Bastion laser-guided missiles on top of their regular anti-tank shells — giving them extra range and punch. Moscow sent these upgraded tanks to fight in the Second Chechen War alongside similarly improved T-62Ms. Russian commanders felt they were more “expendable” in the brutal guerrilla war than more expensive T-72 and T-80s.

So despite the T-54/55’s combat shortcomings, these tanks promise to remain popular for many decades more. The design’s adaptability and a stable market for upgrades contribute to its longevity.