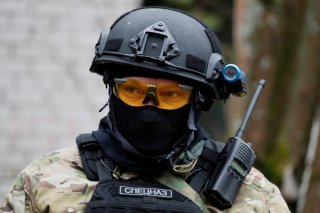 Here's What You Need To Remember: It was the group’s involvement in a 1985 hostage crisis in Lebanon that earned the Alpha Group an international reputation as a vicious — but effective — counterterror unit.

Russia and the Lebanese Islamic militia Hezbollah have become close allies in the civil war in Syria, with both of them supporting the regime of Syrian President Bashar Al Assad in the conflict.

Their relationship has not always been so friendly.

When members of Hezbollah kidnapped four Russian diplomats in 1985, killing one of them, Russia dispatched the KGB’s Alpha Group to deal with the situation.

It first gained notoriety for leading the assault on the presidential palace in Kabul during the initial phases of Russia’s invasion of Afghanistan in 1979. Throughout the 1980s and ’90s, its members participated in several high-publicity take-downs of terrorists, insurgents and kidnappers.

When the KGB and parts of the Soviet military attempted a coup in 1990, members of Alpha Group were given the job of securing the parliament in Moscow and neutralizing then-president Boris Yeltsin.

Alpha Group survived the collapse of the Soviet Union and currently operates under the auspices of the FSB, the successor to the KGB. Yet its confrontation with Hezbollah during the hostage crisis in Lebanon remains one of its most widely discussed, and strikingly brutal, operations.

The KGB created Alpha Group — or Spetsgruppa A —in 1974 in response to the Black September attacks at the Munich Olympics two years earlier.

Eight terrorists linked to the Palestinian Liberation Front had infiltrated the Olympic Village, killed two Israeli athletes and took several others hostage. West German police botched a rescue attempt at a NATO airport hours later. Nine more Israelis died there, along with five of the terrorists and a West German police officer.

Alpha Group formed in the fiasco’s aftermath. But the group quickly took on a broader role than mere counterterrorism.

When the Soviet Union invaded Afghanistan in 1979, Alpha Group and the KGB’s Zenith Group, another special forces unit, led a contingent of 700 troops in the assault on the Tajbeg Palace in Kabul, according to David Cox in his book Close Protection: The Politics of Guarding Russia’s Rulers.

The commandos entered the country under the auspices of protecting the Russian embassy. The assault on Tajbeg Palace on Dec. 27, 1979 was the first phase of the Soviet invasion. Afghan president Hafizullah Amin was hosting a party at the palace that evening. Numerous civilian guests and palace residents, including women and children, were present when the assault began.

A special forces officer who participated in the raid told the BBC in 2009 that the officers in charge ordered soldiers to kill everyone in the building.

“I was a Soviet soldier,” Rustam Tursunkulov recalled. “We were trained to accept orders without question. I was in the special forces — it’s the worst job.”

An Afghan named Najiba was inside the palace when the Soviets arrived. She was only 11 years old at the time. “The things I saw,” Najiba told the BBC. “My God — people on the floor. I saw a person … like a scene from a nightmare movie. Dead bodies. Lots.”

“Please try to understand that when there’s a battle going on, it’s hard to know there are children there,” Tursunkulov explained. “In any army there has to be someone who’ll do the harshest, most horrible tasks. Unfortunately, it’s not soldiers, but politicians who make wars.”

Amin’s 11-year-old son was killed in the attack on the palace, and Amin himself either died during the action or soon afterward — perhaps executed. According to Tursunkulov, the bodies of everyone killed in the palace were wrapped in carpets and buried nearby without ceremony.

Alpha Group continued to lead KGB efforts in domestic counterterrorism and counterintelligence through the 1980s. The unit targeted CIA agents and operatives and led the raid against the hijackers of Aeroflot Flight 6833 in Tbilisi, Georgia in 1983. They killed three of the hijackers and captured the rest, but lost five hostages.

It was the group’s involvement in a 1985 hostage crisis in Lebanon that earned the Alpha Group an international reputation as a vicious — but effective — counterterror unit.

On Sept. 20, 1985, the Islamic Liberation Organization, a part of Hezbollah, kidnapped four Russian diplomats in Beirut. A message from the terrorists “warned that the four Soviet captives would be executed, one by one, unless Moscow pressured pro-Syrian militiamen to cease shelling positions held by the pro-Iranian fundamentalist militia in Lebanon’s northern port city of Tripoli,” according to a contemporary report by Jack McKinney of Philadelphia’s Daily News.

Moscow initially attempted to open communication channels in hope of negotiating the release of hostages. But after the captors executed one of the Russians, Moscow sent in Alpha Group.

The remaining hostages were released within a few weeks, which came as a surprise to journalists, considering that many hostages taken in Lebanon were held for months or even years.

Brig. Gen. Ghazi Kanaan, who was the chief of intelligence for Syrian forces in Lebanon at time, was originally credited with orchestrating the Russians’ release. This account trickled out to journalists in other countries.

“Western journalists reported that the kidnappers were forced to free the hostages because a block-to-block search by pro-Syrian militiamen was closing in on them,” McKinney wrote.

However, according to Israeli sources cited in the Daily News, it was actually the KGB that negotiated the release. And in Hezbollah: The Global Footprint of Lebanon’s Party of God, Matthew Levitt clarifies that it wasn’t just your run-of-the-mill KGB operatives. It was Alpha Group.

“In one retelling,” Levitt writes, “the KGB kidnapped a relative of the hostage-taking organization’s chief, cut off the relative’s ear, and sent it to his family. In another, the Alpha unit abducted one of the kidnapper’s brothers, and sent two of his fingers home to his family in separate envelopes.

“Still another version has the Soviet operatives kidnapping a dozen Shi’a, one of whom was the relative of a Hezbollah leader. The relative was castrated and shot in the head, his testicles stuffed in his mouth, and his body shipped to Hezbollah with a letter promising a similar fate for the 11 other Shi’a captives if the three Soviet hostages were not released.”

While the details of the various “retellings” differ, the effect is much the same. Given the fact that the Alpha Group was dispatched to Beirut, and that the hostages were released so quickly when other countries, including the United States, had failed to facilitate such prompt responses from hostage-takers in Lebanon, it seems reasonable that it was Alpha Group rather than a Syrian search that prompted the quick release.

Russia has a longstanding policy of targeting family members of terrorists. The reports of Alpha Group’s alleged actions in Beirut are consistent with this tradition.

The Beirut saga is arguably the most sensational of Alpha Group’s operations. But the unit continued to play a prominent role in Soviet and Russian military, intelligence and counterterrorism efforts.

A Lithuanian detachment of the Alpha Group attempted to quell the secession movement there in January 1991, killing 14 civilians and injuring hundreds more when they seized the Vilnius television tower.

Later that same year, Alpha Group officers stormed the Russian parliament during a coup against Soviet president Mikhail Gorbachev. They were directed to capture Russian Federation president Boris Yeltsin — or to kill him if it seemed he might escape.

More recently, the counterterrorism unit was involved in ending the hostage crisis at the Beslan school in North Ossetia in 2004. During the battle between the Alpha Group and dozens of terrorists, 330 people died, including 186 children.

There have also been reports of Alpha Group fighting in the civil war in Ukraine.