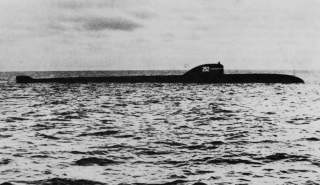 Key point: The power of the November class’s reactors was bought at the price of safety and reliability.

The 627’s VM-A reactors were more powerful than their American contemporaries, speeding the Project 627s along up to thirty knots (34.5 miles per hour). However, the 627 lacked another quality generally expected of a nuclear submarine: the reactors were extremely noisy, making the Project 627 boats easy to detect despite the use of stealthy propellers and the first anti-sonar coating applied to a nuclear submarine. This lack of discretion, combined with its inferior sonar array, made the November class ill-suited for hunting opposing submarines.