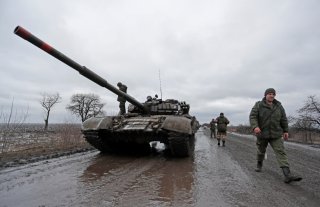 Reports emerged earlier this week of a massive Russian military convoy—made up of main battle tanks (MBT’s), towed artillery units, and other armored vehicles—heading for Kiev. However, the Russian convoy has reportedly stalled in recent days. "They haven't … from our best estimates have not made any appreciable progress geographically speaking in the last 24 to 36 hours, and again nothing very significant. It is difficult for us to know with great specificity all that is going into this stall if you will," said Pentagon press secretary John Kirby on Wednesday.

Kirby offered several potential reasons to explain the apparent delay. “One, we believe the Russians are deliberately, actually, regrouping themselves and reassessing the progress that they have not made and how to make up for lost time. Two, we do believe that they have experienced logistics and sustainment challenges, challenges that we don't believe they fully anticipated. And three, they are getting resistance from the Ukrainians. We have some indications—nothing that we can 100 percent independently verify, but we have some indications that the Ukrainians have in fact tried to slow down that convoy. And we have no reason to doubt those reports, but again we can't speak to it in great specificity,” Kirby said.

Though Ukrainian units have allegedly chipped away at the convoy from the front and rear, Kiev simply does not have the capability to destroy or meaningfully degrade a force of this size. General Sir Richard Barrons, former Commander of the United Kingdom’s Joint Forces Command, told the BBC that the convoy is being hampered by supply shortages and other logistical issues. "There's a massive logistical failure to provide fuel, food, spare parts and tyres … they got stuck in the mud in a way that makes it difficult to move vehicles out," he said. Barrons added that the bigger problem could be coming from command and control issues, which may include faulty radio equipment and compromised communications networks.

"The main body of the large Russian column advancing on Kyiv remains over 30km from the center of the city having been delayed by staunch Ukrainian resistance, mechanical breakdown and congestion," the United Kingdom’s Ministry of Defence tweeted on Thursday.

The news defies earlier U.S. intelligence assessments that indicated Kiev could fall within days of a major Russian assault on Ukraine. However, U.S. officials continue to caution that the Ukrainian defenders remain significantly outmatched by Russia’s qualitatively and quantitatively superior forces. As the invading forces continued to gain ground in parts of the country, the third meeting between Russian and Ukrainian delegations took place in Belarus on Thursday. Negotiations are reportedly underway for the creation of humanitarian corridors to evacuate “civilians from destroyed or constantly shelled villages/cities.”