Russia's ICBM: How Billions Could Die at the Push of a Button 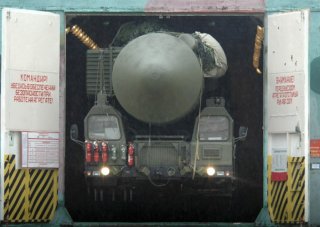 Russia inherited the world’s most extensive missile collection from the Soviet Union, which it actively maintains and upgrades.

In the Russian exclave Kaliningrad, missiles serve in an anti-access/area-denial role, whereas in Russia proper, missiles are rather part of Russian strategic deterrence both regionally with non-nuclear missiles, and globally via nuclear-armed missiles.

Though haltingly, Russia is moving to modernize it’s ballistic and cruise missile arsenal and is a global leader in both missile production and technical knowledge. Of special note is Moscow's larger, long-range missiles that have a range to hit countries thousands of miles away--like the United States.

The Mod 6, the latest variant of the Satan missile, was deployed operationally just before the collapse of the Soviet Union in 1988. Both the Mod 6 missile and it’s predecessor, the Mod 5, were given better protection against defensive missiles via better decoy warheads, a rapid retargeting system, and improved MIRVs payload (multiple independently targetable reentry vehicles).

The Satan system is silo-based, and a likely a purely nuclear warhead system.

Despite the fearsome name, Satan is actually slated for retirement and is slowly being phased out. Still, its range of 11,000 kilometers or about 6,800 miles is impressive.

Another silo-based intercontinental ballistic missile is the Sarmat, which will entirely replace the Satan. One of the newest missiles in Russia’s arsenal, it will become operational in 2021 after testing hick-ups delayed its entry.

It is believed to carry quite a large payload of up to 10,000 kilograms in weight for a wide range of warheads and can be armed with both conventional and nuclear warheads. The Sarmat can reportedly carry up to “10 large warheads, 16 smaller ones, a combination of warheads and countermeasures, or hypersonic boost-glide vehicles.”

It may be one of the farthest-flying missiles in Russia, thanks to a massive range —10,00- to 18,000 kilometers, or approximately 6,800 to 11,000 miles which would put virtually the entire world in range.