Russia's Military Dream: A Navy Full of Aircraft Carriers (But It Won't Happen) 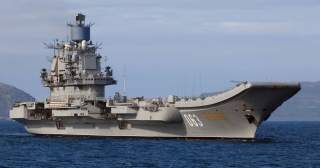