Russia's Naval Modernization: Blowing the United States Out of the Water? 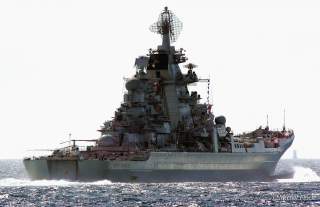 In an effort to make up for the Russian Navy’s abysmal performance deficiencies, Russian President Vladimir Putin recently confirmed the prioritization of equipping some ocean-going vessels with hypersonic missiles—missiles that travel faster and have a greater range than their American counterparts. In the event of conflict at sea, Russia may have an insurmountable advantage. Here’s why.

The Sad State of the Russian Navy

Russia’s Navy is woefully inadequate. Most ships are legacy Soviet vessels that are rusting and unreliable. Russia’s lone aircraft carrier, the Admiral Kuznetsov, is indicative of the Russian Navy as a whole.

The Admiral Kuznetsov was originally laid down in 1982 and commissioned in 1990. It has been plagued by technical problems. In 2016, the Russian aircraft carrier sailed through the English channel on its way to support the Russian effort in Syria. It was widely derided on social media and in the news. It belched huge plumes of black smoke during its transit and was accompanied for the entire duration of its journey by a tugboat in case of a breakdown. During a visit to Turkey in 2009, an electrical fire broke out on the aircraft carrier, resulting in the death of one sailor. Ill-designed pipes freeze during the winter, so water is shut off to most of the ship to prevent ruptures. Only half of the ship’s fifty latrines work—for a crew of about 1,900. After the Kuznetsov’s only dry dock sank in 2018, the vessel’s support infrastructure became virtually nonexistent.

To top it off, a diesel fire recently broke out on the ship’s lower deck. Amateur video of the incident showed multiple fires on the ship visible from an adjacent dock. According to an Arctic and Barents regional observer, ships with nuclear waste waiting to be serviced were in the vicinity, as there are storage facilities for spent nuclear fuel, which is of course radioactive. The Russian Navy is quite literally fighting multiple fires, both vividly real and from an operational capability standpoint.

Despite the myriad operational shortcomings and deficiencies, hypersonic missiles could give the Russian Navy a badly needed leg up.

Hypersonic missiles are blindingly fast, some of which can reach speeds of Mach 10. To put that into perspective, the standard American anti-ship missile, the Harpoon, reaches a top speed of 0.85 Mach, which is considered in the high subsonic range. The Harpoon missile initially entered in service since 1977 and has been widely exported to American allies and friendly nations. Depending on the variant, it has a range of 90 to 240 kilometers. Although the Harpoon was recently upgraded, its usefulness may be in question.

The two Russian missiles, the Kalibur and the Zircon, fly faster and farther than the Harpoon. While the Kalibur’s range is not definitively known, it is estimated to be 1,500 to 2,500 kilometers, considerably farther than that of the Harpoon. More impressive is how mind-numbingly fast the Zircon can travel— Mach 9, and possibly as fast as Mach 10, at least for part of its flight duration. If accurate, that would translate to nearly 130 miles in just one minute.

In a biannual gathering at Sochi, President Vladimir Putin stressed the necessity of equipping ships and submarines with hypersonic missiles. “In the coming years, it is necessary to actively increase the combat capabilities of the fleet. In many respects, this depends on the planned admission of navigational frigates and submarines modified for the use of Zircon hypersonic missiles.” He also stated the intended goal of sea-based hypersonics, explaining that these weapons are “extremely important for maintaining strategic stability.”

Both weapons would pose a serious threat to carrier groups in particular. Said one Russian defense expert, “A ship grouping [carrier group] is a moving target. To destroy such moving targets, the new-generation Zircon missiles were created. These anti-ship missiles can hit both single and group ship targets.” He further elaborated, emphasizing the degree to which Russian hypersonic missile programs have outpaced the United States. “Zircons are hypersonic, which allows them to overcome both the far and near air-defense zones of ship groupings. In the creation of such missiles, we have gone far ahead, seriously breaking away from the Americans. They now have no such class of missiles.”

At the heart of Putin’s words is the desire to make other nations think twice before striking the Russian Navy, decrepit though it may be, by augmenting dated platforms with new capabilities. As previously explained, existing missile defense systems are optimized for intercepting existing missile threats, which typically do not travel in excess of Mach 2.5.

In a stark admission of the degree to which the United States is being outpaced, U.S. Secretary of Defense Mark Esper stated that the United States needs to do more within the realm of hypersonics. “Winning future battles requires us to contend with our competitors growing anti-access area denial capabilities, hypersonic weapons, anti-satellite systems and other emerging technologies,” he said as part of his keynote address at the Reagan National Defense Forum.

President Putin’s emphasis on maritime-based hypersonic weapons highlights the trend in arms development seen in both Russia and the China: a shift towards faster, longer-range missiles to counter American superiority at sea.

While the United States also has hypersonics in the works, including several billion dollars of the 2020 defense budget earmarked for hypersonic development, the competition coming from Russia is fierce, and their designs are maturing. Whichever country can first field effective hypersonics will have a distinct battlefield advantage.