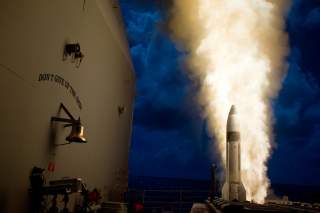 Air defense is one of the most critical features of a modern warship. Planes represent some of the most lethal threats to a ship with modern anti-ship missiles and other guided munitions. However, ships are some of the most ideal platforms to mount anti-aircraft missiles on, having a lot of power readily available and not being restricted by the same weight and mobility restrictions ground systems have.

The primary anti-aircraft weapon of the modern warship is the naval surface-to-air missile (SAM). America’s primary naval SAM is the Standard Missile, in service in some form or another since the 1960s. Its manufacturer, Raytheon, calls it the “world’s premier fleet-area air defense weapon.” The Standard Missile was purpose designed to be fired from ships, either from rotating mounts or a ship’s vertical launch system (VLS).

In contrast, Russia’s primary naval SAM is a variant of the S-300, a missile originally built for the Soviet Air Defense Forces. The S-300F (naval) has seen parallel evolution to its land based counterparts, but how does it stack up to the latest Standard Missile? Do the Standard’s naval roots give it an edge in seaborne deployment? Or does the S-300’s roots as a multiple target engagement track-while-scan advanced SAM make it more deadly?

To compare the missiles, a good place to start is comparing how they are integrated onto their ships. The Standard Missile primarily arms Arleigh Burke and Ticonderoga class ships in the U.S. Navy, both of which put the Standard Missile in Mk 41 Vertical Launch System (VLS). The Standard Missile is modular, meaning the ship can choose to carry more Standards by swapping out cells that normally held other missiles. The Mk 41 VLS is simple: it is an array of cells, with each cell containing a missile. The cells can be launched in practically any order.

The S-300F also uses vertical launch, since the original land-based missile was designed to be vertically launched from a canister. Unlike the Standard, the S-300F VLS is of a rotating drum type where the missiles are stored vertically in a drum. There is only one launch position, and the drum must be rotated to move the next missile in line with the launch position before the next launch.

This results in reduced rate of fire versus the Mk 41. It also means the ships are less versatile than those using Mk41 since the deck space allocated to the S-300F cannot be used for other purposes. The latest Russian ships use the unified UKSK VLS, which can fire lighter anti-air missiles. However, heavy SAMs like the S-300 (and even the new navalized S-400) are still fired from the old school revolving drum launchers.

Moving from the launchers to the missiles themselves, the United States appears to have a definite advantage borne out of the developmental maturity of the Standard Missile series. The navalized S-series missiles are typically unified to some degree with their land counterparts, gaining an increase in range when their land counterparts do.

The U.S. Navy has the capability to engage aircraft out to 240m with the SM-2 Block IV, which has a listed range of 240km. This missile entered service in 2004, following a lengthy development process for the Mk 72 thrust vectoring booster that gave it a massive boost in range. Russian ships only reached parity with this capability in 2015, when a version of the 48N6DM missile (adapted from the S-400) was integrated onto the Admiral Nakhimov, which could reach out to 250km.

However, by this point, the new active-radar homing SM-6 missile was already in service for four years. The exact specifications of this new missile are uncertain, but the active-radar homing nature combined with the U.S. Navy’s ability to wage net-centric warfare through cooperative engagement capability could mean that the SM-6’s effective range could be far longer. Some sources list it as 370km.

In the end, the purpose built Standard Missile has evolved faster and gained range and capability (active radar homing and net centric warfare) faster than the Russian S-series naval missiles. The U.S. Navy drove the development of the extended range capability of Standard Missiles as part of its desire to maintain overmatch against potential threats. Due to the Standard being a naval missile, it wasn’t hamstrung by being part of a unified missile development program.

In contrast, the S-series due to unification with land systems has not seen the need to rapidly modernize as rapidly and has fallen behind. The shorter range is probably an acceptable compromise for the Russian Navy, due to the defensive nature of the Russian fleet, the need to have a very long range anti-air missile is less important.