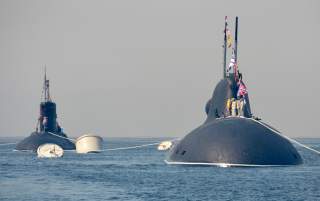 Key point: The next phase of mutually assured destruction.

On May 22, 2018, the Russian submarine Yuri Dolgoruky slipped beneath the waves of the Arctic White Sea. Hatches along the submerged boat’s spine opened, flooding the capacious tubes beneath. Moments later, an undersea volcano seemingly erupted from the depths.

Amidst roiling smoke, four stubby-looking missiles measuring twelve-meters in length emerged one by one. Momentarily, they seemed on the verge of faltering backward into the sea before their solid-fuel rockets ignited, propelling them high into the stratosphere. The four missiles soared across Russia to land in a missile test range on the Kamchatka peninsula, roughly 3,500 miles away.

You can see the launch sequence in this video.

Like the nuclear-powered ballistic missile submarines (SSBNs) operated by United States, China, France, the United Kingdom, and India, the primary purpose of Borei-class submarines is almost unimaginably grim: to bring ruin to an adversary’s cities, even should other nuclear forces be wiped out in a first strike.

Each of the submarine’s sixteen R-30 Bulava (“Mace”) missiles typically carries six 150-kiloton nuclear warheads designed to split apart to hit separate targets. This means one Borei can rain seventy-two nuclear warheads ten times more destructive than the bomb dropped on Hiroshima on cities and military bases over 5,800 miles away.

The Borei is the most advanced SSBN in the Russian Navy, and is designed to replace its seven Soviet-era Delta-class SSBNs. Throughout most of the Cold War, Soviets submarines were noisier than their Western counterparts, and thus vulnerable to detection and attack by Western attack submarines.

Concept work on the Project 955 Borei began during the 1980s. After the collapse of the Soviet Union, in 1996 cash-strapped Russia decided to lower costs by taking three incomplete Akula hulls and convert them into a revised Borei design.

Construction proceeded at Severodvinsk, and lead ship Yury Dolgoruky (named after the Russian prince who founded the city of Moscow) launched in 2008 and was commissioned five years later in January 2013.

An SSBN’s primary purpose is to remain undetected long enough to unleash its terrifying firepower—a strategy made easier thanks to their nuclear reactors allowing them remain submerged for months at a time. Towards that end, the Borei is designed to higher standards of acoustic stealth than Soviet-era designs, and is more capable of evading enemies that do get an inkling of its position.

The Borei’s sleek 170-meter-long hull is considered more typical of Western-style submarine engineering, than the boxier Delta-class. Both the hull and the machinery inside the gargantuan 24,000-ton (submerged) submarine are coated in sound-dampening rubber.

The Borei’s OKF-650B 190-megawatt reactor powers a pump-jet propulsion system that allows it to remain unusually quiet while cruising near its maximum underwater speed of thirty knots. This probably makes the Borei quieter, and able to remain discrete at higher speeds, than the propeller-driven Ohio-class submarine. Russian media claims its acoustic signature is one-fifth that of the Typhoon and Delta-IV class SSBN and that the Borei was also uniquely suited to perform nuclear deterrence patrols in the southern hemisphere, though Russian SSBNs have historically remained close to friendly waters for protection.

For defense against enemy ships and submarines, the Borei also has eight 533-millimeter torpedo tubes and six countermeasure launchers atop its bow. Should things go terribly wrong for the relatively small crew of 107, the Russian SSBN has a pop-out escape pod on its back.

The Borei was originally intended to carry twelve larger and more advanced R-39 “Bark” submarine-launched ballistic missiles (SLBM). But the R-39 was canceled in 1998 after failing in three test launches.

Thus, the Borei had to be redesigned to carry sixteen smaller Bulava missiles derived from the land-based Topol-M intercontinental ballistic missile. The Bulava also proved very troubled, however, failing in ten out of twenty-seven test launches due to manufacturing defects. Two failures occurred after the Bulava was operationally deployed on the Borei in 2013.

The Bulava has an unusually shallow flight trajectory, making it harder to intercept, and can be fired while the Borei is moving. The 40-ton missiles can deploy up to forty decoys to try to divert defensive missiles fire by anti-ballistic missiles systems like the Alaska-based Ground-based Midcourse Defense system.

However, publicized specifications imply the R-30 may be nearly four times less accurate than the Trident D5 SLBMs on U.S. and British submarines, with only half of shots landing within 350 meters of a target. This implies the R-30 is a purely strategic weapon lacking the precision to reliably take out hardened military targets like nuclear silos in a first-strike scenario.

Of the three active Boreis, the Yuri Dologoruky is based at Ghadzhievo (near Murmansk) assigned to the Northern Fleet, while the Alexander Nevsky and the Vladimir Monomakh are part of the Pacific Fleet, based at Vilyuchinsk on the Kamchatka Peninsula.

Between 2012 and 2016, the Severomash shipyard laid down five new generation Project 955A Borei-II/Borei-A submarines. Lead boat Knyaz Vladimir (Prince Vladimir) launched in 2017 and is due to be commissioned in 2019.

While retaining the same basic tear-drop profile, Knyaz Vladimir appears to be six meters longer based on satellite photos. The 955’s distinctive forward-slanted sail (conning tower) has been replaced with a more conventional tapered design in the 955A. As you can see in this diagram, 955A’s tail has a larger pump jet, an all-moving rudder and new end plates to its horizontal fins for improved maneuverability. A new long blister on the lower hull may house an improved flank-array sonar, or serve as a stowage hangar. You can see detailed imagery, deck plans and analysis of the Borei-A at the website Covert Shores.

Other upgrades include modernized combat, sensor and communications systems, improved acoustic stealth and crew habitability. One Russian source claims the new model is optimized “to decrease launch time to the minimum.”

All five Boreis-A are due to be commissioned by 2021, though Russian shipbuilding frequently falls behind schedule. Nonetheless, given the Russian Navy has had to cancel, downsize or downgrade numerous projects in the last few years, the money invested in completing the subs testifies to the importance Moscow places on submarine nuclear deterrence. The boats cost slightly less than half the cost of their American Ohio-class counterparts at $890 million, but Moscow’s defense budget is only one-twelfth that of the United States.

The eight Boreis would maintain, but not expand, on a standing force of eight Russian SSBNs evenly split between the Pacific and Northern fleets—enough for multiple submarines to perform deterrence patrols at the same time.

Russian media has variously indicated two or six more Boreis could be built in the mid to late 2020s, for a total of ten to fourteen Boreis of both types. Two of these could potentially be a cruise-missile-carrying Borei-K variant that would parallel the U.S. Navy’s Ohio-class SSGN cruise missile submarines.

However, the Borei represents only half of the Russian Navy’s future sea-based nuclear deterrence force. The other half will come from a unique fleet of four Khaborovsk-class submarines each carrying six nuclear-powered Poseidon drone-torpedoes designed to swim across oceanic distances to blast coastal cities and naval bases with megaton-yield warheads. Moscow, it seems, would like a little more redundancy in its ability to end civilization as we know it in the event of a nuclear conflict.

Sébastien Roblin holds a master’s degree in conflict resolution from Georgetown University and served as a university instructor for the Peace Corps in China. He has also worked in education, editing, and refugee resettlement in France and the United States. He currently writes on security and military history for War Is Boring. This first appeared in June 2019 and is being republished due to reader interest.