Russia's New Stealth Fighter Will Be Unveiled Today (We Think, At Least) 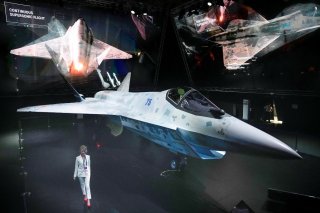 The 2021 edition of the MAKS International Air and Space Show has kicked off, marking the first large-scale aviation show of the post-pandemic era.

MAKS is a biennial Russian air show, held on odd years at the Zhukovsky International Airport in the Moscow region. The show has long been one of the Russian defense industry’s preferred mediums for advertising its export catalog to high-profile customers. MAKS-2019, for instance, brought widely-circulated footage of Russian president Vladimir Putin treating Turkish president Recep Tayyip Erdoğan to an ice cream cone while discussing the export variant of Russia’s Su-57 fifth-generation air superiority fighter.

The opening ceremony, reportedly attended by Vladimir Putin, was headlined by a robust Su-57 aerobatic performance, with onlookers gazing on as the fighter performed a demanding sequence of stalls, rolls, and spins.

The first day of the 2021 MAKS edition has, so far, been largely focused on experimental unmanned technologies. MiG showed a model of a flying-wing refueling drone that apparently can also perform strike missions, as well as a model of a lightweight single-engine fighter with a protruding glass cockpit. MiG says the two are meant to operate together and has not specified whether or not the drone will be compatible with any other aircraft. It is unclear as of the time of writing if MiG’s new drone and light fighter have moved beyond the design concept stage into active research and development.

Rostec subsidiary the Russian Helicopters Group has unveiled the BAS-200 small rotary-wing unmanned aerial vehicle (UAV), a helicopter-like drone capable of delivering cargoes of up to 50kg. The United Engine Corporation (UEC), another Rostec affiliate, has presented a hybrid power unit compatible with drones and light helicopters. "The aircraft propellers are launched into rotation by electric motors, which can be powered either separately from a generator or a storage battery, or from their total energy. Hybridization makes it possible to effectively control energy flows and choose the most optimal modes of operation of its sources in comparison with traditional power units," announced the UEC press service. Using a single power unit across multiple products could help Rostec to cut down on manufacturing as well as research and development costs at a time when Russia’s military is increasingly investing in military drone platforms to fulfill a wide range of missions across its major service branches.

Alexander Mikheyev, CEO of Rosoboronexport—Russia’s state arms export agency—told reporters at the MAKS air show earlier today that Russia will soon be delivering an additional batch of S-400 missile defense systems to Turkey, which signed an import deal for the S-400 back in 2017 and received its first units in 2019. "We expect to finish the project in the coming months," he said. "Final consultations are underway, a financial model has been put together, as well as a program for technical cooperation on the project.”

Looming over the show is Rostec’s mysterious new jet fighter, which reportedly will be inspected by Putin before being publicly unveiled later today. "This is a single-motor [aircraft], if I understand it correctly and, yes, the president will inspect it," said Kremlin spokesman Dmitry Peskov.