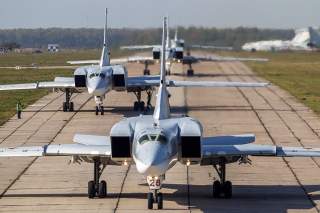 The upgraded bomber, which can be armed with a range of cruise and aeroballistic missiles, has the potential to threaten targets across Europe and the North Atlantic. But the big question is whether or not the Tu-22M3M will be counted against Russia’s quota on nuclear delivery vehicles under the New START treaty.

"The first experimental Tupolev-22M3M was created under a large-scale program for upgrading strategic and long-range aircraft PAO Tupolev is working on at the moment. In the next phase the first batch of Tupolev-22M3 planes currently in service will be upgraded," Tupolev CEO Alexander Konyukhov said at the upgraded bombers roll out ceremony on August 16 according to the state-owned TASS news agency.

Now that the Tu-22M3M has been formally rolled out, the aircraft will be inducted into a flight test program before the Russian defense ministry decides to proceed with fielding the newly modified bomber. "The Defense Ministry will make a decision to upgrade operational planes on the basis of results of joint government certification tests,” Konyukhov said. “By and large the upgrade program will ensure the operation of strategic and long-range planes in the long term and effective performance of their tasks.”

According to Tupolev, the aircraft has been extensively modernized. “In the process of profound upgrade the Tupolev-22M3M was equipped with the newest on-board digital radio-electronic equipment made of domestically manufactured components. In particular, the plane boasts new navigation, communication and targeting equipment, new engine and fuel consumption control systems and radio-electronic warfare means," the Tupolev company told TASS. “The upgraded plane was also equipped with a new information and control system with digital indicators in the cockpit and the function of intellectual support for the crew.”

The new Tu-22M3M will armed with new weapons, the two most notable of which are the X-47M2 Kinzhal aeroballistic missile and the X-32 supersonic anti-ship missile. The X-32 is a massive 13,000lbs weapon has a speed of about Mach 4.5 while flying at altitudes of 130,000ft over a range of about 620 miles. It can be armed with a 1,102lbs conventional warhead or a nuclear warhead if needed. The Tu-22M3M will be able to carry three such weapons.

Meanwhile, the X-47M2 Kinzhal would allow the Backfire to strike and land and maritime targets across Europe. With a claimed range of over 1,200 nautical miles and a speed of Mach 10, the addition of the Kinzhal missile would significantly boost the Backfire’s capabilities to strike land and maritime targets across Europe, the Middle East, the Asia Pacific and the North Atlantic regions. The Russians claim that the Kinzhal—which is based on the 9K720 Iskander short-range ballistic missile—is effectively invulnerable to existing ballistic missile defenses because of its maneuverability in flight. Moreover, the Russians claim the missile is capable of hitting a wide range of targets.

“This is a class of precision weapons fitted with multifunctional combat capabilities making it possible to strike both stationary and mobile targets,” Russian deputy defense minister Yuri Borisov told TASS . “Specifically, aircraft carriers and cruiser-class warships, destroyers and frigates are potential targets for this weapon.”

However, while there is no doubt that the Tu-22M3M has been extensively upgraded from the previous version of the Backfire, analysts are skeptical about the prospects of a new engine for the bomber. “I'm quite skeptical on NK-32-02 engine refit for Tu-22M3,” Michael Kofman, a research scientist specializing in Russian military affair at the Center for Naval Analysis, had told The National Interest earlier.

While there is skepticism amongst analysts that the Tu-22M3M has new more efficient engines installed, there is no doubt that the newly upgraded bomber will have significantly upgraded range. The Tu-22M3M incorporates an aerial refueling boom to allow the bomber to refuel inflight, which greatly extends its range and endurance. Earlier versions of the Backfire had incorporated a fixed aerial refueling boom during the Soviet-era, but Moscow had agreed to remove those probes during the Strategic Arms Reduction Treaty (START) I negotiations in 1991.

It is not clear if the Tu-22M3M will count as a “heavy bomber” under today’s New START treaty with its renewed aerial refueling capability. Under the New START treaty, the United States and Russia are each limited to 700 launch platforms, which includes submarine launched ballistic missiles (SLBMs), intercontinental ballistic missiles (ICBMs) and heavy bombers. Under the treaty, each heavy bomber is counted as one warhead. The U.S. State Department is certain to take the matter up with Moscow once the new Tu-22M3Ms are fielded.