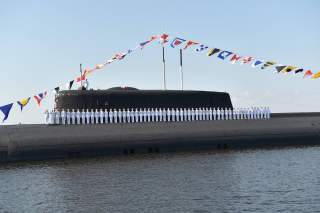 The incident itself had immediate and drastic effects: five dead and a spike in radiation that was up to 16 times higher than normal. But the larger fallout from the Aug. 8 explosion of a nuclear-powered cruise missile on Russia's White Sea coast has drawn renewed attention to the development of some of the country's newest, high-tech strategic weapons. The development of the weapon in question fits into Moscow's broader effort to maintain its nuclear deterrent. While Russia's ambitions are pushing the boundaries of its capabilities in some of these projects — to even deadly results, as the most recent case demonstrates — the overall effort will undoubtedly force the United States into a response.

In the Aug. 8 incident, Russian scientists were reportedly testing the Burevestnik missile system, which is also known as the 9M730 or, in NATO, as the SSC-X-9 Skyfall. The Russian government hasn't openly stated that it was the Burevestnik that exploded, but the few details it has shared point in that direction. Different statements have described a missile launched from an offshore test platform that included a small power source that used radioactive materials — the exact qualities that set the Burevestnik apart as a missile system. Indeed, the Burevestnik's use of a miniature nuclear reactor would give it virtually unlimited range.

Russian President Vladimir Putin boasted of this unlimited range when he announced a number of strategic weapons under development in a state of the nation address in March 2018, heralding the Burevestnik and five other weapon systems that are meant to reinforce Russia's ability to maintain a strategic deterrent against the United States. While Putin revealed no great secret in highlighting these weapons in his speech (in fact, some even date back to the Soviet era), he has prioritized their development during his rule.

These systems, apart from the Peresvet (a mobile laser used for air and missile defense), are all specifically geared toward evading or defeating U.S. missile defense capabilities, which Russia considers a significant threat to its ability to sustain a strategic deterrent. The strategic nuclear force is one of Russia's last claims to great power status. Combined with its importance in countering NATO's superiority in conventional arms, Russia's desire to retain its dominant status compels it to develop its strategic deterrent above all else. This is also why Russia perceives U.S. missile defense efforts as a grave threat and why it is working to ensure it can defeat it. Accordingly, the development of these mostly offensive systems plays a critical role in how Russia has chosen to address the strategic arms race, rather than, for example, striving to achieve parity with the United States in defensive capabilities. The Burevestnik missile, in turn, fits into this pattern, since it can achieve a global reach thanks to its nuclear-powered turbine and, because it is a cruise missile, can evade missile defenses by maneuvering in flight.

Another weapon that came into focus after Putin's March 2018 announcement was the nuclear-capable Kinzhal hypersonic air-launched missile. This missile, which fighter aircraft or bombers would transport, can reach speeds as fast as Mach 10 and maneuver to overcome missile defense systems. Following thorough testing, the Kinzhal is now operational in an experimental capacity on some aircraft, though further development to extend its use to Russia's strategic bombers continues. Of course, as an air-launched ballistic missile, the weapon essentially rejigs existing technologies in a new form. But despite the apparent success of the program, some have argued the Kinzhal may not perform as well as Russia claims and may fail to combine its speed and maneuverability with accuracy.

Pushing the concept of hypersonics even further, Russia has also been working on the Avangard hypersonic glide vehicle. According to the military's plans, intercontinental ballistic missiles (ICBM) will deliver the vehicle, which will then detach and home in on its target at speeds of up to Mach 27. Just like the Burevestnik, the Avangard can also maneuver in flight — albeit at much greater speeds — to actively avoid missile defenses. The Avangard program itself has faced major threats in the past, as the Kremlin came close to canceling the program in 2014 following a series of failed tests. But as a result of more successful recent tests, the Avangard is expected to become operational by next year — notwithstanding questions about Russia's ability to source the advanced materials required to produce the system on a mass scale.

The Avangard also depends to some degree on the development of a separate weapon that Putin mentioned in his 2018 address: the Sarmat ICBM. While other ICBM models have launched the Avangard in previous tests, the Sarmat is meant to eventually replace the entire Russian silo-based nuclear arsenal. While the missile is primarily an updated and more powerful version of its Soviet-era predecessor, it offers some additional capabilities against missile defenses thanks to its shorter boost phase (which limits the time during which Russia's adversaries can track it from space at launch) and reported ability to function as a Fractional Orbital Bombardment System (FOBS). The latter capability would allow the Sarmat to bring nuclear warheads into orbit before reentering the atmosphere to continue on toward their targets. This means that Russian nuclear weapons would not need to follow a ballistic or projectile path toward the United States but could be fired in any direction before emerging from space to approach the country from areas with less early-warning radar or missile-defense coverage.

Not all of these Russian strategic superweapons are missiles, however; one of the most atypical arms is the Poseidon, a large torpedo that is both nuclear-powered and nuclear-armed. Described as an unmanned underwater vehicle, the Poseidon is capable of delivering a nuclear payload to coastal targets or even carrier groups at sea. According to Russian plans, the 24-meter-long weapon will be able to reach speeds of up to 100 kilometers per hour and travel as far as 10,000 kilometers on its own. The Poseidon's nuclear-powered propulsion is similar to that of nuclear submarines and easier than that of the Burevestnik. By traveling underwater, the Poseidon will also be able to avoid missile defense systems, although it will, naturally, only be able to hit a limited target set. At the same time, only specific, purpose-built submarines like the Belgorod will be able to deploy the Poseidon, meaning Russia will encounter difficulties if it wishes to deploy significant numbers of the weapon. 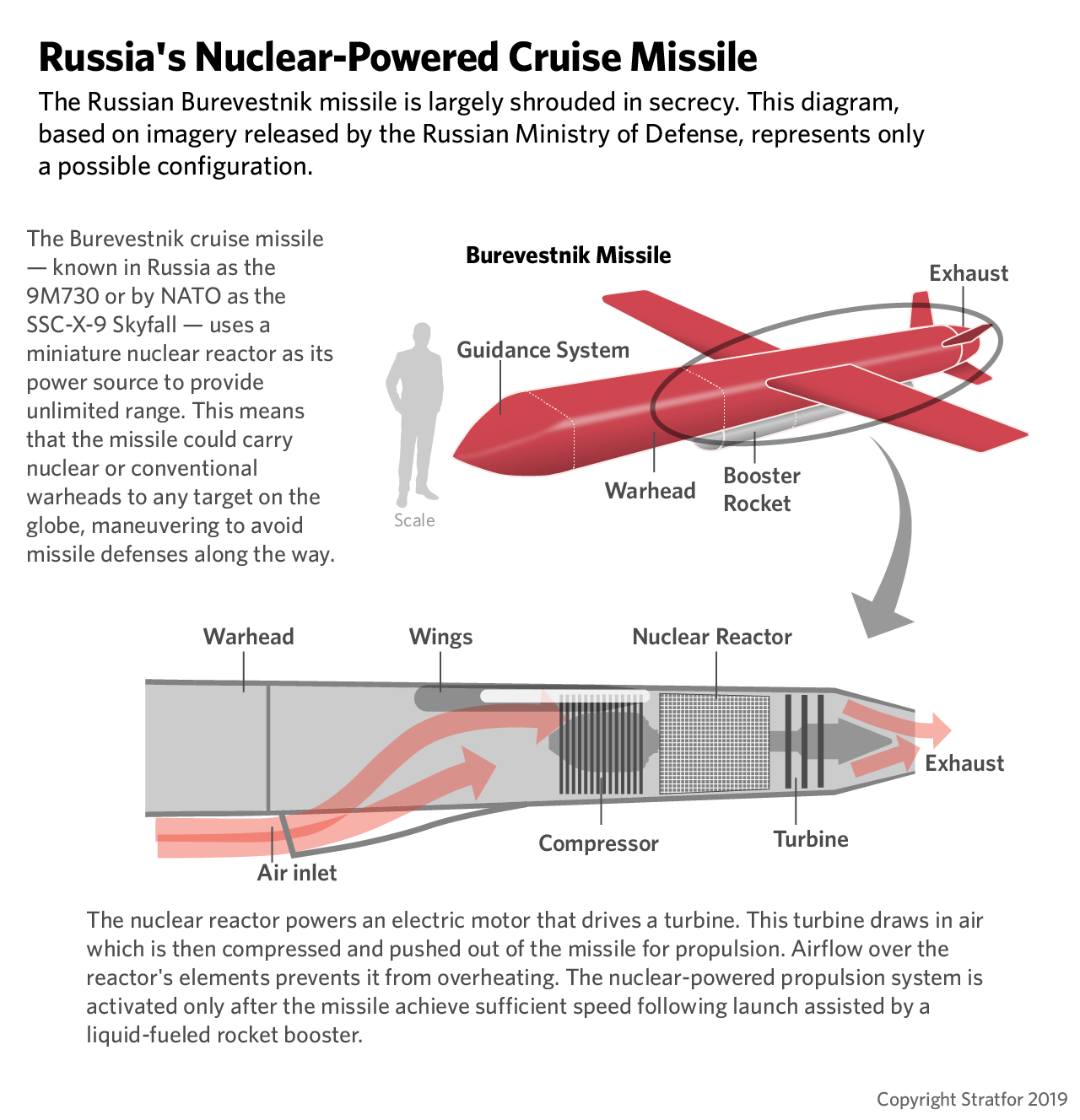 A Mixed Bag of Success

The ill-fated Aug. 8 test illustrates the risks involved in developing a missile powered by a nuclear reactor — namely, the possibility that an accident could release radioactive materials. More than that, however, it also highlights the Russian defense industry's continued challenges of actually getting the missile to work. While Russia has denied that other tests of the Burevestnik have failed, U.S. intelligence sources have previously claimed that at least four missiles crashed between November 2017 and February 2018, with the longest flight measuring only 35 kilometers (22 miles). That would make the Aug. 8 launch the fifth known — and, so far, most unsuccessful — test flight to date.

The Burevestnik has been in development since the early 2000s, but the lofty aims of the missile currently appear to be beyond the capabilities of Russia's defense engineers. The missile is designed to launch using a liquid-fueled engine before initiating the nuclear reactor as its power source. In previous tests, however, it seems the Burevestnik's nuclear reactor failed to initiate, resulting in crashes just a few minutes later. And needless to say, the fatalities and other casualties caused by the latest accident may also disrupt the development program. For now, Russia has stated it will continue developing the Burevestnik rather than cancel it after nearly two decades of trying.

The Burevestnik's failures notwithstanding, the missile is just one aspect of Russia's attempts to increase the capabilities of its strategic forces, as the development of other programs has proceeded much more promisingly. And even if the Kremlin isn't successful at bringing all of these projects to fruition, the ones that are succeeding are already giving the United States plenty to think about in its continuing strategic arms race with Russia.