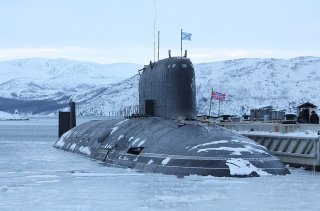 Following several years of delays, the lead Yasen-M submarine is on the verge of finally entering service in the Russian Navy’s Northern Fleet.

A defense industry insider source told TASS news earlier this week that the Yasen-M nuclear-powered cruise missile submarine Kazan will be handed over to the Navy on May 7. “Ceremonies of the acceptance statement signing for Kazan and the St. Andrew’s flag hoisting will provisionally take place on May 7,” the source said, adding that the submarine completed a “verification sortie” in April. A May 7 delivery timeline means that Kazan would enter service in time for Russia’s Victory Day celebration on May 9.

TASS, a state media outlet, clarified that it has not independently corroborated this information, but the publication’s defense sources have earned a consistent track record of accuracy. Still, it is worth noting that prior reports suggested Kazan was delayed later into this summer, to arrive in time for Russia’s Navy Day celebration on July 25. Initially slated for commission as early as 2017, Kazan has faced cyclical delays in recent years. Some reports indicate that Kazan was struggling to complete some of its state trials, but the full extent of its problems has not been revealed.

The Yasen-class is one of Russia’s two major ongoing submarine projects, the other being the Borei nuclear ballistic missile submarine. The Yasen line is slated to replace Russia’s aging roster of Soviet-era and 1990s-era nuclear-attack submarines, particularly the prolific Akula-class. The first flagship Yasen boat, Severodvinsk, was laid down in 1993, but construction work on the new platform sputtered in the years following the Soviet collapse. Severodvinsk was launched only in 2010—by then, some of its features and design principles were verging on obsolescence. Moscow decided to relaunch the Yasen line under the Yasen-M designation, offering a slew of tweaks and performance improvements to account for the sixteen-year gap between the Severodvinsk and Kazan. The Yasen-M upgrade package brings modernized onboard electronics, minor outward design changes that possibly include a sharper bow, and what is likely the new KTP-6 for substantial noise level reductions.

The Yasen-M line will be distinguished by a large and potent armament suite. It was reported late last month that the new submarine line will be able to salvo-launch Kalibr-PL and Oniks cruise missiles; it can carry up to thirty-two of the latter or forty of the former. The Yasen-M line will likewise support the new 3M22 Tsirkon winged anti-ship hypersonic cruise missile. Tsirkon reportedly has a top speed of up to Mach 9 or around 9,800 kilometers per hour and is capable of evasive mid-flight maneuvers, potentially posing a credible threat against U.S. carrier strike groups. It will also possibly support the Kalibr-M, a heavier Kalibr variant with more than double the maximum operating range at up to 4,500 kilometers.

Eight Yasen vessels are currently planned. Of these, two—Kazan and Novosibirsk—have been launched and will soon enter service. Six more are in varying stages of construction, with the next three—Krasnoyarsk, Arkhangelsk, and Perm—scheduled to be launched this year. All of the Navy’s planned Yasen vessels are slated for delivery by 2027.