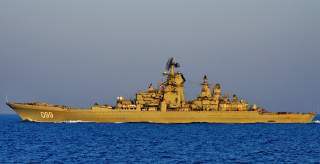 A shadowy new missile soon could arm some of the oldest, and some of the newest, ships in the Russian fleet.

The Kremlin has announced it plans to add the Zircon hypersonic anti-ship missile to at least six vessels in the Northern and Pacific Fleets.

They include both of the enormous Kirov-class nuclear battlecruisers, a destroyer, a frigate, a corvette and a guided-missile submarine. More ships could get the Zircon in coming years -- assuming, of course, the new weapon works as advertised.

The Kremlin has released very little information about the Zircon. In his state-of-the-nation address in February 2019, Russian president Vladimir Putin said the Zircon missile was capable of traveling as fast as Mach 9 over a distance of more than 600 miles to strike sea and land targets.

The 3S-14 roughly is similar to the U.S. Navy’s Mark 41 vertical-launch system that fires a wide array of air-defense, missile-defense, anti-ship and land-attack missiles.

Owing to their high speed, hypersonic weapons could complicate efforts by target vessels to intercept or evade attack. It’s not for no reason that the U.S. Navy is moving quickly to deploy increasingly powerful lasers on its ships. Lasers could be some of the few defensive systems that can react fast enough to intercept an incoming hypersonic missile.

Zircon could represent a major advancement in missile technology, so it’s no surprise that its development has been troubled. The munition was scheduled for testing in 2017 but that date slipped to late 2019.

The first ship to launch a Zircon could be the brand-new, first-in-class frigate Admiral Gorshkov. The Northern Fleet frigate is slated to test Zircon by the end of 2019, according to Russia’s state-run media organization TASS.

Meanwhile, the Russian navy plans to add Zircons to the new Baltic Fleet corvette Gremyashchiy as well as to the Udaloy-class destroyer Marshal Shaposhnikov and the Oscar-class guided-missile submarine Irkutsk, both with the Pacific Fleet, TASS reported.

The Kirov-class battlecruisers Admiral Nakhimov and Petr Velikiy, respectively with the Pacific and Northern Fleets. Both vessels currently are undergoing deep repairs and modernization and could return to service in the early 2020s.

In the future, the Kremlin could install 3S-14 launchers in more ships and subs, just as the Pentagon has added Mark 41 launchers to all of its roughly 100 large surface combatants. If Zircon works and Russia can afford large numbers of the missile, it could weigh on the existing naval balance of power.

The U.S. fleet eventually could get its own hypersonic anti-ship missiles. But the Americans want a bigger missile than the Zircon is, one that’s too big to fit in the Mark 41 launcher.

The Navy is working with the U.S. Army and U.S. Air Force on two separate but related hypersonics efforts. One to develop a booster for a hypersonic missile. The other to build a common glide body for a hypersonic weapon’s second stage. The Army expects to begin fielding its version of the missile around 2023.

Before the Navy can deploy its own version of the super-fast missile, it must add new launchers to its warships. “We are going to need, we expect, space for longer-range missiles,” former surface warfare director Rear Adm. Ron Boxall told Defense News.

Submarines with their larger missile tubes could be the first to carry hypersonic weapons. Destroyers would require changes to their Mark 41 systems, perhaps replace four existing cells with one much larger one that would be more flexible.

“So the idea [is] that you could make a bigger cell, even if you don’t use it for one big missile, you could use it for multiple missiles — quad-pack, eight-pack, whatever,” Boxall explained.