Russia's Only Aircraft Carrier Just Went up in Flames 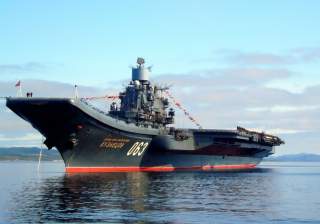 It seemed as though things couldn't get any worse for Russia's sole, aging aircraft carrier after a crane smashed through its hull in 2018-- but then, it caught fire.

Russian state news agency TASS reported that a fire broke out on Admiral Kuznetsov in the Murmansk shipyard, where it is currently undergoing a deep refit. Six people were initially reported to be injured in the aftermath of the accident, reportedly from toxic fumes. That number has since shot up to twelve. One ship officer is still missing as of the time of writing, and one serviceman from the Northern Fleet is confirmed to have died in the effort to contain the fire. Video footage from the event shows the aircraft carrier covered in smoke and beset by fires at multiple contact points.

A rough sequence of events has since emerged. The fire is widely believed to have been caused by a power cable explosion during routine welding work on Thursday morning. Two Northern Fleet servicemen unsuccessfully tried to quell the flames, suffering severe respiratory burns in the process. The conflagration continued to spread throughout a significant portion of the ship before finally being cordoned off. The fire is still ongoing as of the time of writing; operatives from the Ministry of Emergency Situations (EMERCOM) are on the scene to coordinate the next steps.

The accident’s proximate cause is still to be determined, pending the outcome of a criminal investigation announced earlier today. The investigation opened on the basis of Article 216-- “violation of safety rules during construction and similar work”-- will presumably hone in on the United Shipbuilding Corporation (USC) contractors whose welding work may have been related to the power cable explosion that set off the fire.

In the months following the 2018 drydock disaster, United Shipbuilding Corporation (USC) Chief Alexei Rakhmanov and various Kremlin officials have continually reaffirmed that they intend to abide by the official timetable for modernizing and relaunching Admiral Kuznetsov: finishing the repair work by 2020, completing state trials by 2021, and returning the ship to the Russian Navy by 2022. That timeline was widely seen as unrealistic, given the immense logistical and financial outlays required to not only repair but modernize Kuznetsov.

The full extent of the damage will be revealed over the coming days, but the accident is set to complicate what is already a costly and controversial repair process for Russia’s only aircraft carrier. It remains to be seen if this fire-- the latest in a long series of mishaps for Admiral Kuznetsov-- proves to be the impetus in pushing the Russian Navy and Ministry of Defense to reconsider the fundamental question looming over Kuznetsov: does Russia really need an aircraft carrier? For an increasing number of Russian commentators and defense insiders, the answer is a resounding no. The Russian Ministry of Defense’s own naval modernization strategy has consistently eschewed the kind of global power projection capabilities for which aircraft carriers are needed, instead prioritizing the construction of a lean, local force spearheaded by submarines and corvettes.

It is often suggested that the Kremlin continues to cling on to Admiral Kuznetsov as a prestige project; a kind of membership card in the exclusive club of maritime great powers. But as Kuznetsov continues to stumble from one disaster on to the next, the Russian defense establishment may very well find themselves asking if their only aircraft carrier is becoming not so much a symbol of military might as a chronic source of embarrassment.