Russia's Pacific Fleet is Getting New Tanks–To Offset NATO in the East? 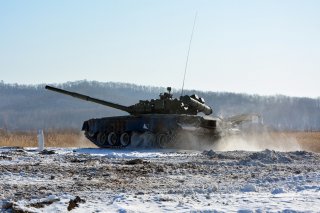 Russia is boosting its Pacific Fleet with a large shipment of main battle tanks (MBTs).

The Pacific Fleet’s marine corps branch has received over twenty upgraded T-80BV tanks, according to the Fleet’s press office. "A train with combat hardware arrived at a railway station in Vladivostok the other day,” read a Fleet statement. “After the unloading operation, the combat vehicles escorted by military auto police were delivered on special platforms to the military unit’s auto pool," the statement added. The Pacific Fleet’s far eastern Kamchatka and Primorye marine corps groups previously received a shipment of ten T-80BV’s in 2018 and again in 2019.

The Pacific and Northern Fleets are assessed by military experts as Russia’s two most powerful naval formations, which also include the Northern, Baltic, and Black Sea Fleets, as well as the Caspian Flotilla. Though the Pacific Fleet does not find itself engaged in tensions with NATO forces as routinely as its Baltic and Black Sea counterparts, the Kremlin is increasingly wary of being tangled up in a larger regional conflict between China and the West. In remarks given at an energy forum, Russian president Vladimir Putin urged Beijing not to invade Taiwan. “I think China does not need to use force. China is a huge powerful economy, and in terms of purchasing parity, China is the number one economy in the world ahead of the United States now,” Putin said. “By increasing this economic potential, China is capable of implementing its national objectives. I do not see any threats.”

Introduced in the mid-1970s, the original Soviet T-80 was one of the world’s first MBTs to employ a turbine engine. The T-80’s unique engine setup gave the tank unparalleled mobility, earning it the moniker “flying tank.” The T-80 saw its baptism by fire during the First Chechen War from 1994 to 1996, incurring a mixed performance record that soured top Russian military brass on future investments into gas-turbine engine tanks. These MBTs were ill-suited for anti-infantry combat operations in dense urban spaces and tended to be manned by inexperienced crews with poor knowledge of local terrain, resulting in over a dozen lost T-80’s during the disastrous siege of Grozny.

The T-80BV is an explosive reactive armor (ERA)-equipped variant of the T-80B, itself a vastly improved development of the T-80 with a new turret, slightly higher-performing engine, compatibility with anti-tank guided missiles, and additional defense features. The T-80BV reportedly has an operational range of five hundred kilometers and a top speed of around seventy km/h. According to the latest estimates, Russia’s Armed Forces are believed to operate just over five hundred T-80 tanks.