Russia's Pacific Fleet Is Getting Stronger. Here's Why That Matters 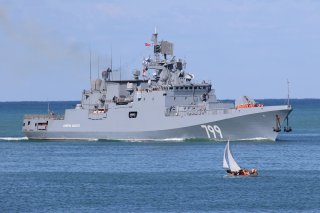 While Russia's Navy has largely become a smaller, regional – yet still quite deadly – fighting force in recent years, in the past few months it has put serious effort into bolstering and more importantly modernizing its fleets in a slow but methodical manner. In the past few months, Russia has made great strides in upgrading its Pacific Fleet, which will receive 15 new warships and supply vessels that will operate in the Far East by the end of 2020.

Rebuilding the Pacific Fleet has been a priority for Russia, which has continued to face many of the same nautical issues and problems that plagued the Soviet Union. While Russia inherited a massive, modern fleet of surface ships and submarines, the Russian Federation was unable to maintain such a flotilla. This included the Pacific Fleet, which in the early 1990s was in the zenith of its might. It operated several hundred warships, small craft and submarines. It had a reach that extended into the Pacific and Indian Oceans.

With the Soviet collapse and the economic crisis of the 1990s the fleet became a cemetery of warships – and for 20 years had only received one new craft, a missile boat.

While it is unlikely that it will be the strongest blue-water force anytime soon, the efforts to restore it to something resembling its former glory have already been under way. One difference from then and now is that the Pacific Fleet's surface force will increasingly be armed with frigates, corvettes and small missile ships.

Among the 15 new vessels that will join the Pacific Fleet are the Gremyashchy corvette of project 20385, the Pertropavlovsk-Kamchatsky diesel-electric submarine of project 636.3, the Yakov Balyaev minesweeper of project 12700, a Raptor-class countersubversion boat of project 03160, the Andrey Stepanov sea tug and two rescue boats of project 23040.

Last November Russia's Gromky corvette underwent a rapid series of back-to-back tests in the Sea of Japan. It is the seventh vessel to be constructed as part of Russia's new Steregushchiy-class series, which are specially commissioned to serve in Russia's Pacific Fleet. The Russian Navy has announced plans to lay down a total of 13 of this class of corvettes through 2021.

"In the short term, the submarine forces of the Pacific Fleet will receive a series of six Project 636.3 diesel-electric submarines currently under construction at the Admiralty Shipyard in St. Petersburg," the Navy chief said in a congratulatory telegram on the occasion of the 289th anniversary of Russia’s Pacific Fleet according to reports from TASS.

The submarines have been upgraded with new life support systems for operations in the Far East, while TASS also reported that there are plans to further arm the Pacific Fleet's submarine force with 4th generation nuclear-powered submarines but also to develop the coastal infrastructure of the sub's basing.

"Work will continue to upgrade Project 1155 large anti-submarine warfare ships and multi-purpose submarines of existing projects," Yevmenov added. "The service life of these ships and submarines has big upgrade potential and it will be used."

Russia's military reforms have already made great progress with its Black Sea and Baltic fleets, as well as the Caspian flotilla. In addition, several submarines and warships have been delivered to the Northern fleet.

In a message to his sailors to mark Baltic Fleet Day, Yevmenov said that the fighting force has made "invaluable contributions" to the Russian people, and announced that ix Karakurt-class corvettes from Project 22800 will join the fleet, while four of the vessels will also be equipped with Pantsir-M anti-aircraft systems.

Frigates of project 22350 and corvettes of new project 20386 built by Severnaya Verf Shipyard (Northern Shipyard) in St. Petersburg will be the backbone of the blue-water force. It isn't clear which of those vessels will join the Pacific Fleet, but it is clear that Russia intends to once again develop it into a viable and fully-fledged blue and green-water force by the end of this decade.