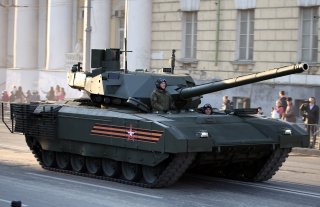 Despite the apparent promise of its T-14 Armata tank, Russia appears to already be surging ahead with yet another next-generation tank, featuring an unmanned turret, two-section design, and an ability to fire hypersonic weapons.

The Russian News Agency TASS reports that conceptual work is already underway on a new tank with both a protected, heavily armored front combat module and a section including an unmanned turret.

The TASS report included technical details about the tank, reporting that the unmanned turret will have a “mounted electro-thermochemical cannon with an automatic loader.”

The second section, the story further specifies, will have a “3,000 hp multi-fuel gas turbine engine.

“The second module is also expected to carry air and ground drones to conduct reconnaissance, search for mines and perform security functions,” the TASS report says.

Perhaps of greatest relevance, the story reports that the new tank will be armed with lasers, hypersonic weapons and “vertical take-off homing missiles with an operating range of up to 12 km.”

Now what is significant about this? Several things. First of all, a tank capable of firing hypersonic weapons would, if true, be a truly groundbreaking development giving heavily armed combat vehicles unprecedented levels of attack speed and lethality. However, while it may be feasible that this could be true, engineering the requisite propulsion systems sufficient to generate the thrust necessary to propel hypersonic weapons from a tank—is not likely a near-term possibility.

As for the vertically-fired missile, the only significant thing mentioned would be the 12 km range. The United States has already armed armored combat vehicles with Hellfire missile firing Short Range Air Defense technology. Javelin anti-tank missiles and Hellfires are already firing from Strykers and other platforms. However, it may be that these U.S.-fired weapons do not yet reach 12 km, a dynamic which could potentially create a disparity in terms of countering drones, helicopters and other aircraft targets.

Helicopter-fired Hellfires can typically reach ranges up to 8 km, and newer Javelins can hit up to 4,750 meters, a distance of 3 miles (close to 6 km). However, this does not mean the ranges of U.S. armored-vehicle fired weapons is not now in the process of being extended considerably, given the current Pentagon goal of “out-ranging” the enemy. In addition, Russia has a tendency to hype some of its weaponry, so it may not be at all clear that its vertically-fired missiles will be capable of 12 km anytime soon.

Finally, the existence of an unmanned turret does not in any way appear ground-breaking. The U.S. Army’s now-in-development Optionally Manned Fighting Vehicle already draws upon levels of human-controlled weapons autonomy. In fact, as titled, the new infantry carrier is being engineered to operate in a completely autonomous fashion.

This means lethality and weapons functionality can be managed by humans performing command and control at safe standoff distances while armored combat vehicles surge forward into combat. The concern with such a technical possibility, which is already possible, is that Russia’s military may not follow any ethical guidelines and enable the weapon to fire upon targets without human intervention.